Actor Sharman Joshi, who opted out of the sequel to 'Golmaal' that is raking in big money at the box office, says he made a mistake by not doing 'Golmaal Returns'.

'Sure I regret it,' Sharman said, weeks after 'Golmaal Returns' was declared a hit. 'And not just because the sequel is a success. I hated myself for breaking up the 'Golmaal' team. But it couldn't be helped. My dates were committed elsewhere,' Sharman told IANS.

Now Sharman, who got noticed for his performance in films like 'Rang De Basanti' and 'Life... In a Metro', says he won't miss the third segment of 'Golmaal'.

'There's no way I'm going to miss the chance to be in the next 'Golmaal' film. All they've to do is to ask. I'd toss aside everything to be in it.'


There is one hitch - for 'Golmaal Returns' Shreyas Talpade had stepped into Sharman's role. 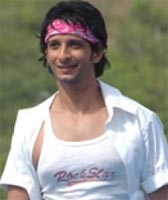 Shetty is aware that Sharman is keen to return to the 'Golmaal' family.

'I'm aware that Sharman wants to be back. We missed him in the sequel. In fact, there're references to him in 'Golmaal Returns'. Ajay Devgan has Sharman's photograph on his office table. So, yes, I'd love to have Sharman back in the next 'Golmaal'. He didn't opt out for any other reason than a genuine date problem. I can't hold that against him. But I can't ask Shreyas to give the role back to Sharman,' Shetty said.

But the director is ready to create space to accommodate Sharman.

'I'm going to write an extra character for part three. Instead of four boys, there will be five. What's the harm in that? That way I lose neither Sharman nor Shreyas. It's very rare to come across such actors. They are very focussed and their comic timing is perfect. I think having them both will make the 'Golmaal' scheme even more of a scream,' said Shetty.

Sharman, of course, couldn't have asked for more.

'I was genuinely in a fix. Saying no to 'Golmaal Returns' was the most painful decision of my life,' the actor said.