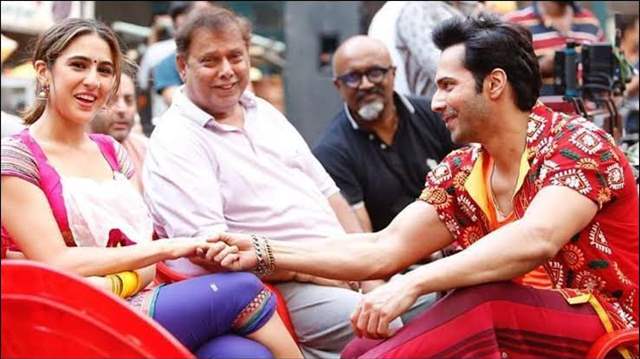 Sara Ali Khan and Varun Dhawan’s Coolie No 1 trailer dropped few days ago and took over the Internet as it continues to be trending on the first position on YouTube.

While the trailer received mixed reviews from the audience, the makers and the cast is super pumped up about the release on December 25, 2020. But before the release, the leading lady of the film, Sara Ali Khan has shared some secrets from the shooting days.

As reported in Mumbai Mirror, Sara shares how once the director David Dhawan got upset and gave her a scolding. However, the actress blames her co star Varun Dhawan for the same.

Sara said, “We were filming ‘Main Toh Raste Se’ when David sir got upset with me and shouted at me because, although I was ready for my shot, I was supposed to tag something on my costume and that was taking time.”

But the actress shares the twist in the story that in reality, David Dhawan was angry on his actor son Varun but vented it out on the actress. “He was doing some costume business in the van and David sir got pretty upset at him as it was delaying the shoot. So basically, he was angry at Varun but vented on me. That was a bit of an issue, but it is all good,” she added.

Seems like the young duo had a blast shooting together and their on screen chemistry will be something to look forward to in Coolie No.1.

The movie is a remake of a 1995 comedy drama of the same name starring Govinda and Karisma Kapoor in lead roles and marks David Dhawan’s 45th film. Coolie No.1 stars Sahil Vaid, Johnny Lever, Paresh Rawal, Rajpal Yadav, Shikha Talsania and Javed Jaferi in important roles and is slated to release on December 25, 2020.