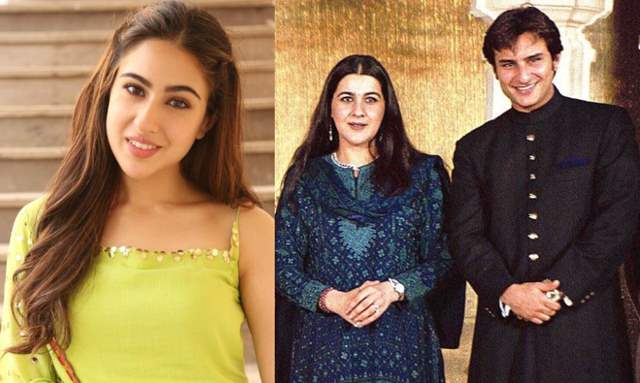 Bollywood star Saif Ali Khan’s divorce from his first wife Amrita Singh was one of the major setbacks in his life. In a previous interview, he even described his divorce as ‘the worst thing ever’ and the degree of impact it had on his children daughter Sara Ali Khan and son Ibrahim Ali Khan.

Now, Sara Ali Khan addressed her parents divorce and made a rare comment on their separation.

For the unversed, Amrita and Saif divorced in 2004 making it one of the most heartbreaking events in the history of Bollywood.

Sara made an appearance in an upcoming episode of Voot Original Feet Up With The Stars Season 3 and shared how living separately gave Saif and Amrita more fulfilling lives. Commenting about their relationship, the Kedarnath actress said, “It’s very simple. If you see there are two options. Either live in the same house where no one is happy or live separately, where everyone is happy with their own lives, and you also get a different kind of love and warmth every time you meet.”

She added, "They both are happy in their own world and lives and because of that their kids are happy too. All of us are much happier than we would have been for sure. So, everything happens for a reason."

Even after the separation, Sara has been on good terms with her father. She and Ibrahim are often seen celebrating special occasions with Saif. They also appeared together on an episode of Koffee With Karan. Sara is also known to be in a good relationship with Kareena.

Meanwhile, on the work front, Sara Ali Khan will be next seen in filmmaker Aanand L Rai’s ‘Atrangi Re’ and she will be sharing screen space with Akshay Kumar and Dhanush in the lead. Furthermore, the actress is also a part of Aditya Dhar’s ‘The Immortal Ashwatthama’ with Vicky Kaushal.

2 months ago What is there to open up in this matter? Isn’t it an old age matter and we all know everything they have to say in this matter long ago..Reporter's needs to understand what is important and what is not..i mean google have so many article about her opinion on her parents divorce why we need another new one in same topic.. It's so unnecessary..

2 months ago She says the same thing every time. I had read a similar article before.