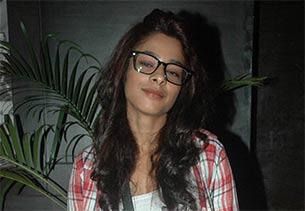 "The kind of environment Santosh sir provides for his actors is very organically engineered. I know he has a massive body of work where there is a lot of commercial stuff, but when he shoots his own films, the process is very organic," Sugandha told IANS.

"In his films, there is not a massive setup. You don't have to wait for hours for one shot. You are working almost throughout the day and you're living out the story almost in a linear manner just as it happens in the script. Therefore, it automatically pushes you in places that are very real," she said.

Sugandha, who enjoys this kind of filmmaking, doesn't like the trappings of an actor.

"I don't like sitting in a vanity van. I don't like applying lot of make-up. I don't like to have the trappings of an actor because they get in the way of your performance. It also somewhere disconnects you from the people on the sets," she said.

"For instance, I want to know what my set designer is doing. I like to be involved with my unit because it gives you the feeling that you are doing something together and not in isolation of each other. All this makes it very real, organic and I enjoy being part of it," Sugandha added.

Sugandha, who has worked on Bollywood projects like "Jaane Tu Ya Jaane Na" and "Tere Bin Laden", chose to work in "Inam" because she found it "unconventional".

"The fact that it was unconventional attracted me. I like to be challenged. I started working when I was 18 years old with BBC and then Nat Geo. I'm a mountaineer. For me to do anything, it's not a matter of being famous or employed, but it's a matter of being challenged," she said.

"The script of 'Inam' is challenging, and I don't think I've have come across anything as powerful as this. The second reason is that to be in the company of someone as illustrious as Santosh Sivan will ensure that you will also do your best," she added.

She feels the most challenging part of working on "Inam" is to "not act".

"The biggest challenge is to not act in films like these. As actors you get used to reaction time, body language and the way you do certain things. But the character I play in the film and I very different. So as a person, it's a breakdown of everything I know emotionally, physically and logically," she said.

"In essence, I had to ensure that there was not even an iota of me in the character I play," said Sugandha.

She plays a character called Rajini in the film, which is about a group of orphans during the Sri Lankan civil war.

The film also features Karunas, Saritha along with a host of newcomers in important roles.

'Naagin 5' To Welcome Two New Entries in The Form of Karan ...
20 minutes ago