View Profile
While the dare-devil Akshay Kumar might not be afraid of doing any of his dangerous stunts, there is a piece of news which could prove to be one helluva clincher for him - something which might not ease out with time! Curious? Read on to know more!
Salman Khan recently made his presence felt, and felt strongl 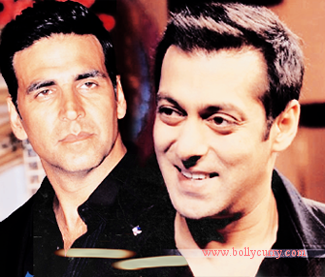 y, throughout tinsel town with his mega-hit Dabbang and by hosting the super-successful fourth season of Bigg Boss. If the rumor-express is to be held true, then there is a huge possibility that the next season of Khatron Ke Khiladi will be hosted by none other than B-town's latest khatron ka khiladi himself, Mr. Salman Khan!
This could prove to be the biggest blow to Akshay; considering his dismal performance in a string of flops last year and also the weak TRP's of Star Plus' Masterchef India.
On the flip side, after successful runs on television with the flattering TRP's of Dus Ka Dum, both season 1 and 2 as well as Bigg Boss 4, it seems as though Salman has never let his producers down! A part of this change as season four's host of KKK is said to be Salman's growing companionship with the channel head.
Putting a full stop to all the queries of who's going to host KKK4 are the reports confirming that Salman has shot the promo for the show in Bangkok, where he is shooting for Bushan Kumar's Ready. Those close to Salman say that he only shoots promos after the contract has been signed, so all that is left is for the news to be broken to Akki.
Seems like we've made work easier for the channel! Meanwhile, will this replacement put an end to the comfortable and amazing rapport between Sallu and Akki?