Sanjay Dutt's six-year imprisonment is threatening to cause a loss of Rs 150 crore to the Hindi film industry. Now, Salman's sentence is slated to be a setback of another Rs 100 crore. Although Sallu's recent release "Marigold" was a flop, with a very low opening, his previous film, "Partner", went on to become a superhit.

Let's take a look at some of the actor's upcoming ventures, some of which may remain incomplete if he is sent to jail. 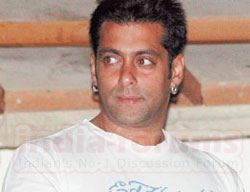