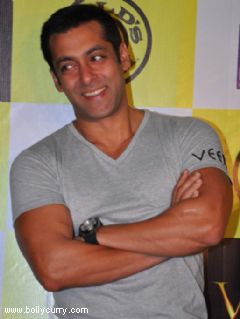 While his numerous romantic escapades have kept the grapevine abuzz for years now, Salman Khan's seemingly eternal single status has at its best incited multiple speculations - from industrywalas and fans alike!

For once however, the media has found someone willing to give the answers. That being Daddy Salim Khan himself.

A popular script writer of yesteryear (in partnership with Javed Akhtar back then), Salim Khan sure is one seasoned man. And it is perhaps the wisdom of those years added to fatherly knowing, which brings out a confident, unfaltering reply in response to endless queries pertaining to Sallu's seemingly perpetual single-hood.

To quote the old artist himself, "There's a contradiction in Salman's character. He gets attracted to women from his industry only... his co-stars become his love interests. Once a relationship is established he starts looking for his mom in them. Now that is not possible." [(C) IANS]

And one can't help but go wide eyed at the suggestions of that answer...

Thankfully, Salim sahib elaborates. Salman, who has been a launch pad for several new female faces - Somy Ali, Sangeeta Bijlani, Aishwarya Rai, Katrina Kaif, Zarine Khan... and most recently Sonakshi Sinha - tends to become emotionally attached with the newcomers, in more cases than not. Romanticism ensues, and it is that after which Salman's expectations of 'his lady' sky rocket, Daddy Salim claims. When he starts seeking his mom in the freshly launched 'struggling' actresses, expectantly, they can never meet his expectations which range from cooking food to doing laundry to almost home keeping for him.

Voila! The only reason to digest such unexpected inside facts comes on account of the source being Salman's father Salim himself.

Consequently, the topic shifts focus to the mystery behind Sallu-Kat's relationship. Where does it currently stand. Where is it headed? Again, it seems, Salim saab is more than willing to be candid. While he claims ignorance of the 'precise situation' he does admit having little hope of an eventual matrimonial bond between the two. He reasons that when a marriage is delayed so long and far, it usually implies elements of uncertainty between concerned individuals. And that. he believes, is not a positive sign.

Wrapping up his interview, Salim Khan expresses concern for Salman's repetition of the same mistake - expecting a fresher into the industry to concentrate on his home and life, over the career she has set her eye upon. Obviously, a recipe for disaster!

With such insight into Salman Khan's relationship woes, we suppose the picture is more than clear. As fans of his talent, we still hope to see the day that the beloved macho Khan will settle down. Amen!