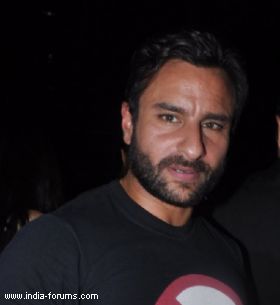 A court here Thursday framed charges against Bollywood actor Saif Ali Khan and two others for assaulting an NRI in a five star hotel more than two years ago.

Saif and his friends, Bilal Amrohi and Shakeel Ladak, were charged with under sections 325 (punishment for voluntarily causing grievous hurt) and 34 (acts done by several persons in futherance of common intention) of the Indian Penal Code by a metropolitan magistrate.

Present in the court, the trio pleaded not guilty to charges, setting the stage for the trial in the case.

The prosecution will present evidence against the three accused before the court at the next hearing scheduled April 30.

On Feb. 22, 2012, Saif was arrested by the Colaba police for assaulting the South Africa-based NRI buisnesman, Iqbal Sharma.

In his complaint, Sharma had said that he was dining along with his father-in-law Raman Patel in a restaurant in the hotel, where Saif and his friends were allegedly chatting loudly and creating a ruckus nearby. He said when he requested them to lower their decibel levels, they attacked him.

Sharma, then the deputy director-general of trade and investment in South Africa, was punched on the nose, leading to a fracture and his father-in-law was also hit.

Also present during the brawl in the hotel were actresses Kareena Kapoor, Karishma Kapoor, Malaika Arora Khan, Amrita Arora and others.

Saif, who claimed that Sharma made a provocative statement in abusive language, was arrested and later released on bail.

Amanda Seyfried Announces The Birth of Second Baby
27 minutes ago

NCB Dismisses Rhea's Claim of 'No Jurisdiction in Drugs ...
28 minutes ago