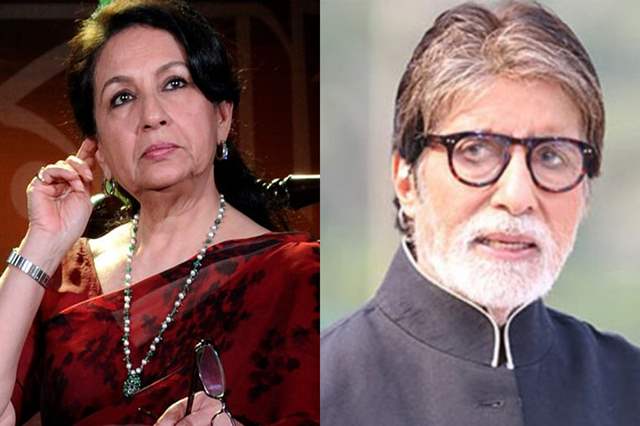 It is a special day indeed and two legends share their birthdays - Sharmila Tagore and Dharmendra. As Tagore turns 76 today, she recently opened up on several things in an interview with SpotboyE. From having no meaty roles being written for ageing actresses to having an entirely different outlook for ageing actors, sharing birthday with Dharmendra and whether she misses being on-screen among other things.

When asked as to why don't we see her much on-screen these days, she said, "This is not something peculiar to me. It happens to all actresses beyond a certain age in our cinema. Even Madhuri Dixit who is a lot younger has not done anything much in spite of Dedh Ishqiya. Whereras the rules are different for Mr Bachchan. He has directors like Shoojit Sircar calling him ‘Sir’ and writing roles for him." She added, "I mean , Mr Bachchan is definitely an icon. But the rules are different for the  actresses. I believe Ribhu Dasgupta’s film Te3n was   a remake  of a Korean film. The original female protagonist has been turned into a male to accommodate Mr Bahchchan. Who does these things for female actors  in  Hindi cinema? But then , on the other hand, who would go to see Pink if Mr  Bachchan didn’t play the lawyer. Cinema does reflect  the reality in society.And I suppose in films they feel they cannot give a woman a role where she is so much in charge of the characters of the plot. In regional films the rules are different, though. Older female characters do get to play substantial roles."

Talking about sharing birthday with Dharmendra, she said, "Indeed, he does. Dharamji has worked enough, done  enough. He has earned this phase of retirement. I must tell you, Dharamji remains exceptionally popular everywhere. I was in Pheonix(US) recently.And I was asked about him everywhere. Everyone dotes on him there .There is a lot of goodwill for Dharamji. The same  goes for my other favourite co-star Shashi Kapoor. They’ve both done  a  lot for the film industry.They will leave behind a great legacy." When asked if she misses being on-screen, she said, "I don’t think so. I’ve never believed in being singlemindedly focused on my film career. Of course , I love acting and when I do a film I give all of myself. But cinema is not my be-all end-all.In that sense I am a bit of an accidental actress. I am interested in so many things. My work with the UNICEF, with NGOs, etc.I like to stand up for whatever I believe in."

Asking if she has any unfulfilled desires, she said, "I wish I could travel more. As long as there’s life there are  wishes  and desires.I just take one day at a time. As for movies if something good came  my way I’d do it . Otherwise I am fine with what I am  doing. I’ve  no time for regrets."

Talking about late husband Tiger Pataudi's biopic plans, she said, "Well,  it will depend on who the captains  of  the ship are , the producers and  director. It is a good story, I  think,  with all  the twists and  the turns  in his life….father’s death, losing his  eye after which his average came down from 60 to 30.To  receive such a   blow at such a  young age….I don’t think anyone else has been able to make those adjustments and  that kind of  an impact with one  eye. He  not only batted but also fielded after the  eye accident. I think he was a wonderful sportsperson. God knows, what he’d have achieved if he had  both his eyes." When asked if son Saif Ali Khan can play his father, she said, "No, let them(the filmmakers) decide. Maybe Saif can  be in one phase  of the story. His story has so  many  phases. Even a good documentary is a  good idea. Unfortunately there  isn’t too much footage on  Tiger  available."

Finally, talking about Sara Ali Khan, she said, "I am very impressed by her… though I don’t see why her selfconfidence should surprise me. But whether  it was Koffee With Karan, Rajeev Masand, BBC…her confidence  humility and charm made me  so happy ….it’s so heartwarming to see her  the way she  has turned  out. When asked what she’s doing in films  after going to Columbia University she said the education was for her growth as a person  and not for career. She’s never tongue-tied. And how well she  stood up for her father  on Karan Johar’s show  I am really  proud of her."