This week, Oye! It's Friday! gets rolling with the rocking tunes and live performance by MAGIK, the band from the biggest hits of last year 'ROCK ON'. The team of 'ROCK ON' Arjun Rampal, Purab Kohli, Luke Kenny and Prachi Desai join the host Farhan this week for an exclusive tte--tte. 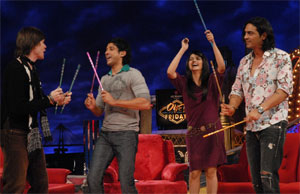 Featured Video
Masumeh Makheja mesmerizes the audience with a sizzling performance and Peter from Australia shocks all with a mind blowing balloon act will delight all this Friday, at 10 PM only on NDTV Imagine.

Gear up for a rocking episode with the band that created magic on as well as off screen. Arjun Rampal for the first time talks about his real and reel life experiences and his lovely daughters Mayra and Mahikaa. Melodrama Queen a.k.a. Prachi Desai shares her chronicles of working on small screen and on popular demand sings her much acclaimed solo song from the film 'Rock On.' The versatile Luke Kenny shows his moonwalking skills as he does a Michael Jackson exclusively on the show. Purab is at his jovial best and lightens up the mood on the show. The 'Rock On' team candidly talks about the change the movie has brought to their life.

Groove with the foot tapping numbers with Masumeh on the hit tracks of the year and get blown by the Balloon act by the talented Peter from Australia.

With Magik on board, you can't expect the show to end without the Magical performance of the ROCK ON gang! Farhan, Arjun, Purab, Luke take on their boy band avatars to sing "Sinbad Sailor" only on popular demand.

If you want be a part of this ROCK ON reunion join us on this must watch episode of Oye! It's Friday! this, February 6th at 10:00 PM only on NDTV Imagine.

+ 3
13 years ago Thx
But he could invite someone else Prachi alredy came in tha show :(