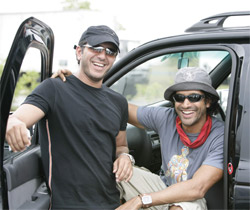 Farhan Akhtar is looking a million bucks in 'Rock On'. Some who have seen the rushes of the film, went to the extent of saying that this Abhishek Kapoor-directed film is much better than the earlier Farhan Akhtar-directed 'Dil Chahata Hai'.

When Farhan heard this, he actually took it as a compliment as this is the first time the audiences will be judging him as an actor. And if people find 'Rock On' better than 'DCH', it only says a lot for the actor in the maker. Three cheers to that. Rock on, Farhan, rock on.
Featured Video