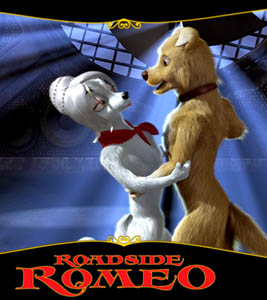 Roadside Romeo is an animated film about a love story of a two dogs. Composing music for an animated film is an equally challenging task, as one need to be very choosy about selection of words and music so that both the elements gels well with the concept of the film. Keeping this point in mind Salim-Sulemain has come up with good tuning and lyrics by Jaideep Sahani are equally good.So let us have a look at the music chart of animated flick 'Roadside Romeo'.

'Main hoon romeo' is a fun filled number. It is a complete party track with high beats and melody. It also has a remix version with a an added flavor of additional rocking beats. The lyrics for the song are written in a comic style by Jaideep Sahni and the vocal is rendered Kunal Ganjawala.

The high hip-hop number ' Apni Doom Oonchi' has strung words, to gratify dogs. It is high on energy, entertainment, and a dose of fun. This light situational track is sung by Kunal Ganjawala accompanying him are Earl,Anushka Manchanda,Salim Merchant and Jugal Hansraj. They together add to this fun package.

A sensuous song 'Choo le na' comes from Sunidhi Chauhan. In this track KK and Sudesh Bhosle join Sunidhi with their great vocals. The song has a Latino flavor and will be treat for all its listeners. The club mix version by DJ Suketu is added in the track includes high beats.

'So Right' is a romantic track that will witness the romancing of Romeo and Laila in the moonlight. Kunal Ganjawala and Gayatri Iyer render the vocals for the song. Gayatri's voice adds certain freshness to the song.

An instrumental romantic track is 'Rooftop Romance'. This pleasant piece is formed with instruments like guitar, piano and violin. It is based on the soundtrack of the song 'So Right'.

Overall, this album is good. You can almost imagine the cute creatures dancing to the song when you hear the soundtrack. It's simply cute, peppy and funny along with lots of beats and technical sound effects. Just try it out because its different.