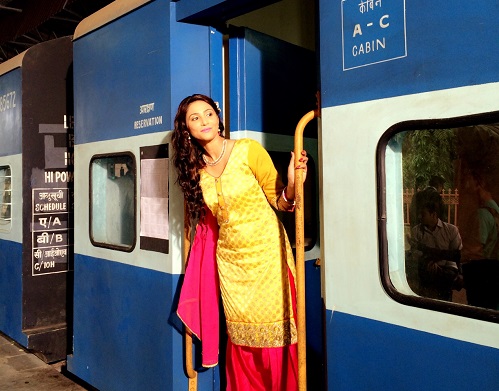 We heard that, "Rishina will be seen playing a girl who helps the CID team in stopping a bomb attack which involves a lot of action sequences."

When contacted Rishina, she confirmed the news saying, "I am playing a patriotic girl who tries to stop a bomb blast at the Gateway of India with her friend and CID thinks that it's our plan to plant the bomb but when they catch us while we were running from the goons we help them stop the attack, and gave them all the information."

She further adds, "I also did action sequences like running in the train and there will be also lots of fighting and jumping from the train. The daredevil stunt was I had to do my close ups, I had to jump from a distance of 30 inches from a running train. Luckily it was a one take okay shot and every one clapped."

Veena.. 6 years ago CID rocks
Hoping for a good episode

MasoomaBukhari 6 years ago love u rishina

i really want u as a cop in CID

u are so sweet n awsum

CID rocksss!!! Thanks for the article and buzz! :P

trupkar 9 years ago that looks more like anushka sharma than Sonali...and I am such a big fan of her. :(

Hot-Stud 9 years ago she was really good as judge in Indian Idol..miss her as an actress though..
either she has changed a lot.. or the magazine did a really bad job at photoshopping the pic.. LOL

.SilentPrincess 9 years ago its sonali... but she changed wayy to much!

i liked her in... hum saath saath hain.. she looked innocent then... but now she lost it... she isn't the same.. you can't recognice her without her name tag!

exquisite. 9 years ago Sonali is way prettier! she doesnt look like her!

sali195 9 years ago OMG!!!!!!!!!, i didn't even recognise her, i cant believe that is sonali bendre. The fact that it mentions her name is the only way that i managed to identify her. I honestly don't no whether this cover is a good or a really bad one lol.

Yuvika_15 9 years ago i agree with taral83...tht doesnt look like sonali...for a sec i saw a glimpse of sonam kapoor in her