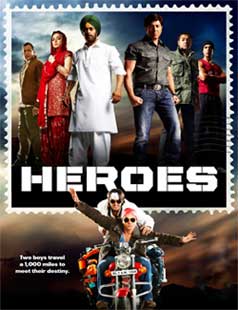 Featured Video
wo guys, Sammy (Sohail Khan) and Ali (Vatsal Sheth), two bosom friends. The assignment takes the two friends, Sammy and Ali from Delhi to Chandigarh, from where they leave for Manali and finally come to Ladakh. In their journey the boys come across certain real life characters played by Salman, preity, Sohail, Sunny and Bobby and these people has a negative impact on the seed of heroism blooms within them, which actually changes their life.

The movie is successful in evoking strong emotions and patriotic feelings inside the audience. Some of the scenes will compel us to salute those who guard our nation just to give us peaceful sleep. The movie delivers a very simple but strong message – We don’t have to be a soldier to love our country.

Salman-Preity, scenes are the highpoint of the film. The emotional moments between them are really great. The scene where Preity is missing her husband and embracing his uniform is a brilliant stroke. The portions between Sunny and Bobby are well executed, but the writing isn't as compelling as Salman-Preity. Mithun and Dino’s is the softest part. It’s well executed but still something was missing.

Binod Pradhan and Gopal Shah's cinematography is very nice. Sajid-Wajid's music is a major asset. 'Mannata' and ‘Makhana’ is the pick of the lot. Soothing composition! Dialogues are magnificent at places.

On the whole, Heroes is a film that will get your senses brimmed up emotionally and sure to be liked by all. The film based on martyrs of war, does not have a single war-scene but is influential enough to incite patriotism. For this simple strength, it’s worth a watch.

Bollycurry Rating: 3 chillies out of 5.