View Profile
The digital era continues to boom with TV czarina Ekta Kapoor foraying into the same. The space has become an alluring aspect to one and all and Alt Balaji may be a few months old, but has already presented an array of shows which have got the attention of the audiences.

And the latest one to go live on the application was producer Vikas Gupta's Class of 2017. Starring a young and energetic ensemble cast, the show now has 10 episodes available for streaming and here we analyse the first 5 episodes and how they fared-

The Story So Far.. 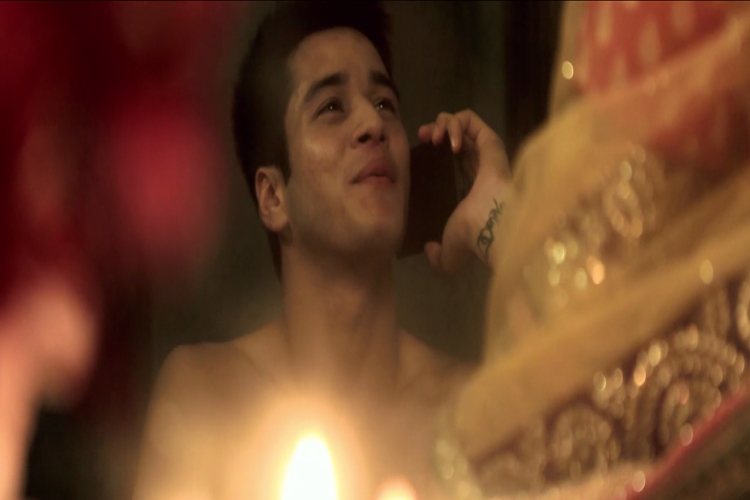 What could have been more raunchy than beginning a web series with two people having sex! Yes! However, there is a twist, as we see a spoilt brat and a casanova Siddharth aka Sid (Anshuman Malhotra) giving 'pleasure' to his 'just-set-to-get-married' teacher and also has an unusual problem which is a constantly erect penis. This happened because he wanted to have the best sex and hence took some pills which has enabled his penis to stay erect. 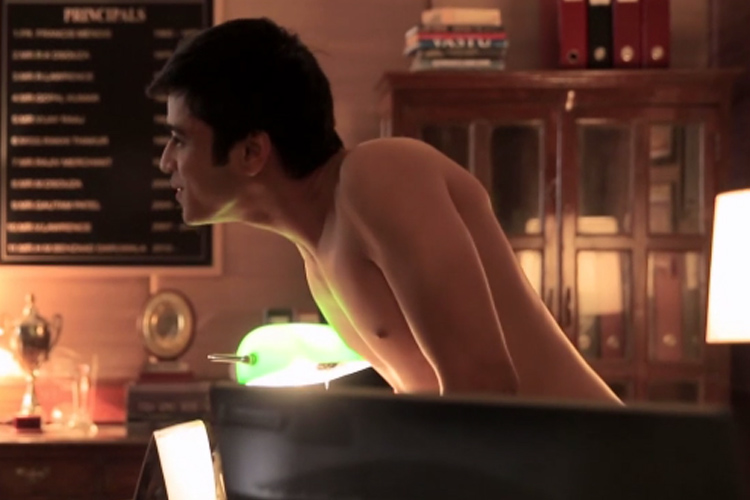 Soon after secretly having sex with his teacher, he sneaks out with his gang of friends to have a secret pool party celebrating their friend, Nikhil's (Rohan Shah) loss of virginity (which he actually hasn't). Some cliched sequences about the blemished youth smoking pot, having alcohol and being sexists at a pool party later, Sid does the unthinkable and sneaks a junior (who, obviously has a crush on him) to the principal's office to have sex.
However, amidst all this, Behzaad (Principal) is extremely furious looking at the post pool party scenes and is determined to punish the ones who have done this. 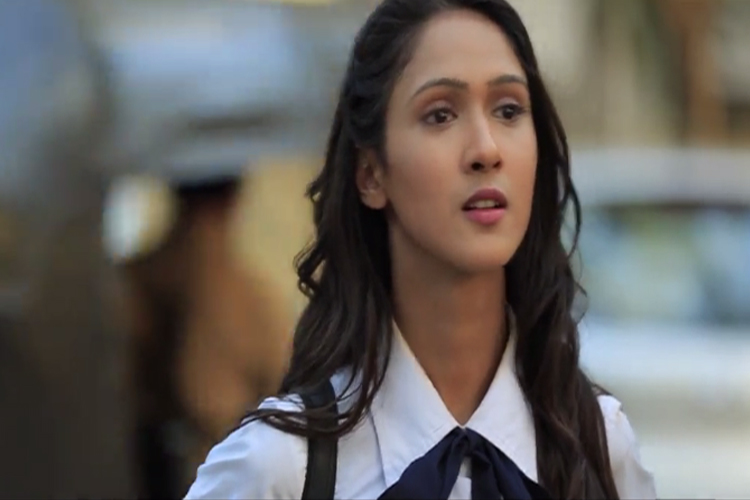 Enter Sarah Peters (Krissan Barreto), a simple, studious and innocent girl who is a new admit to De Nobili High School and immediately faces the wrath of the popular gang as she is berated and ragged by the girls in Sid's gang. However, things get worse when she is waiting at the principal's office and she witnesses Sid and the junior girl's post-sex scene. Sid, being his usual cool thinks he can woo Sarah over but is infact the victim of a tight slap. 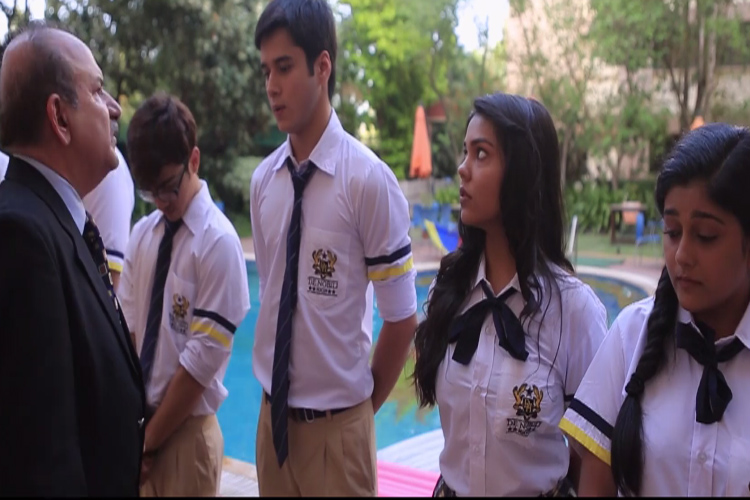 The gang slyly manages to get out of the Principal's office before he comes in. However, Sarah decides to give some payback as she becomes the whistleblower revealing that Sid and his gang did the pool party antics. Managing to fool the Principal with his wittiness during the intervention, Sid warns Sarah that she will have to pay for this! And boy she does! 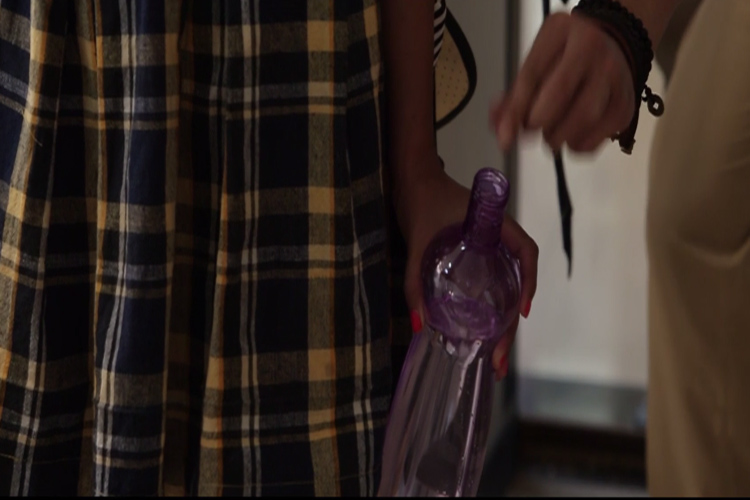 In yet another smart ploy, Sid manages to slip a tablet of 'babaji ki booty' (you know what) in Sarah's bottle of water. The next thing she knows is becoming a crazy woman who wanders around the garden, toys with the Principal and has weird dreams making her a total embarrassment. And of course, all this becomes an even bigger shame as Sid and gang record everything and put it up on social media. 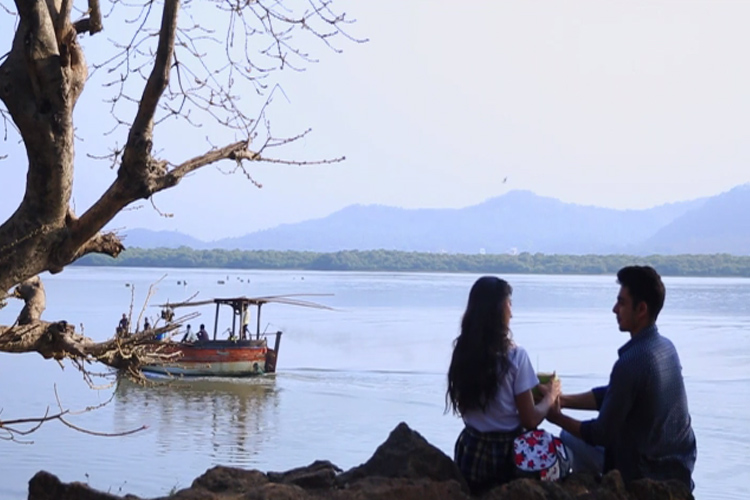 A sad and furious Sarah is sweetly consoled by her boyfriend who is her ultimate support system and later by her father too. And now, Sarah has retribution on her mind with some loggerhead mini battles to follow. 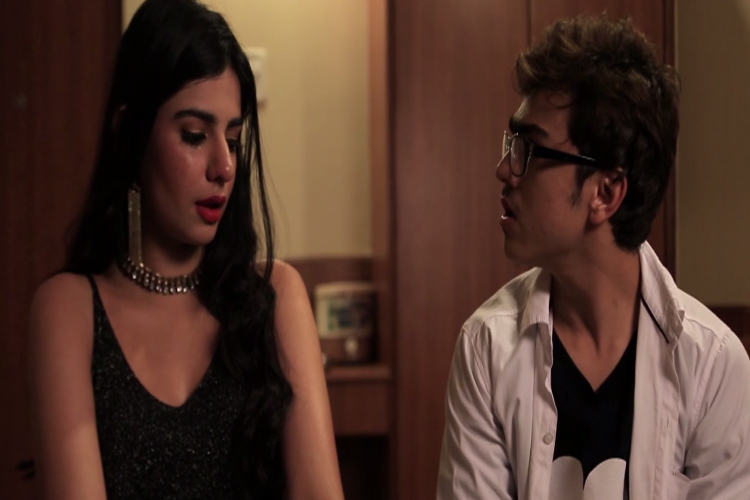 Things become a lot more intense as we are now introduced to the grim reality of two young people from the gang. And those people are Nikhil (Rohan Shah) and Rhea (Sarah Khatri) who have their hidden secrets! While Nikhil is facing peer pressure to lose his virginity and thus calls up an escort company booking an escort; things become rather awkward, when that escort turns out to be none other than his friend, Rhea herself.
Shocked and baffled at each other, Rhea and Nikhil share some soft talk before Rhea decides to take Nikhil at her place.
That's when we come across the poor lifestyle Rhea lives and has been posing to live a lavish and rich life to the rest of the gang as she wants to be a part of them. And in the meantime, we also learn on how Nikhil is stressed about his sexual orientation and there is a possibility that he might be gay.
Rhea and Nikhil decided to keep each other's secrets locked with themselves!
Rating - ***1/2 (3.5/5) 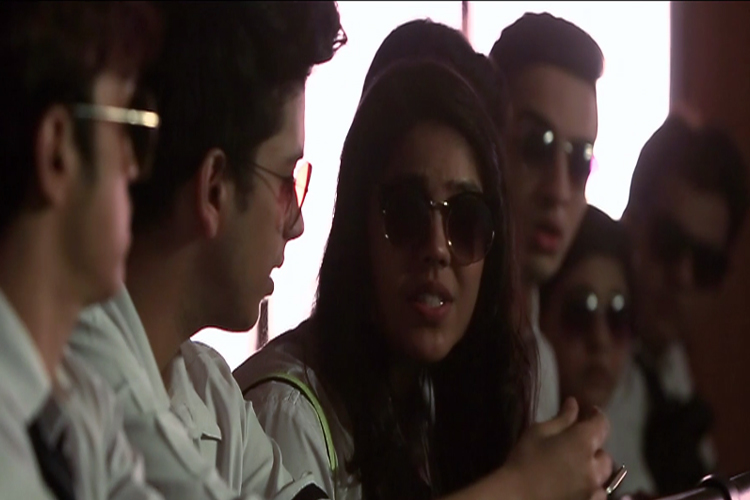 In a rather obvious backdrop, the moments of 'fun' included in the show are truly hilarious and even nostalgic. I mean, who hasn't sneaked out of boring school seminars and has not been a back-bencher, oblivious to what's being taught! All of us have and that is what brings a smile to your face.
Probably not all, but some characters are beautifully sketched and they include those of Ashish Chanchlani, Rohan Shah and Sarah Khatri. A Casanova and a studious girl is something we have seen time and again, but a guy confused about his sexual orientation, an obese guy who is a part of the 'cool group' but misses 'action'; and a 'trying-to-fit-in-to-be-cool' girl but a completely different person otherwise are some amazingly thought and written characters which deserve applause.
There may be occasional 'f**ks' and a few cuss words being used, but there is not an overdose of it which is an absolute relief. That's the thing about foul language that how it's considered cool and 'connecting-the-youth.' This totally misinterpreted notion is not the truth and that is what Class of 2017 depicts. Yes! Majority of the youth use cuss words, but they don't JUST use them to converse all the time! 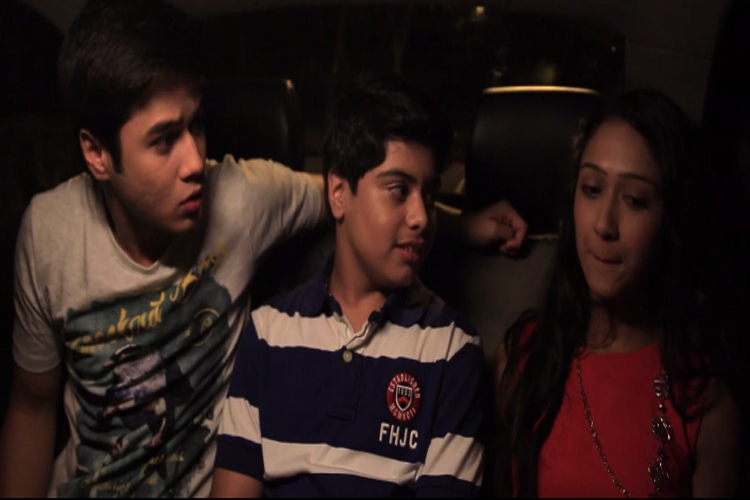 I absolutely loved how there was that moment of kindness between Sid and Sarah, when Sid asks her if she wants to be dropped at her place looking that it's late in the night and travelling alone can be a problem. Even though Sid is a womanizer and the ultimate casanova, this kind gesture gives you that emotional relief that 'Ok, maybe, he is not that 'bad' after-all!'
Rating - ***1/2 (3.5/5)
What's Not-So-Good?
Even though, I totally understand the depiction of youth consuming alcohol, drugs and cigarettes among many other things; the visuals of the same have become rather cliched these days. Everyone has been showing this repetitively and there is a major feeling of monotony to it. Even here, there is a case of the young people consuming it all, but it is so frequent that you tend to feel disconnected after a point of time.
Thanks to the over exploitation of youth related shows like Gumrah, Emotional Attyachaar, Yeh Hai Aashiqui among many more, we have probably seen it ALL and nothing else seems novel to us. The same happens here where several aspects of the show seem 'been-there-seen-that.' Having said that, as we mentioned above, the characterization is absolutely fantastic and that is what acts as a savior.
Rating - ** (2/5)
The Performances 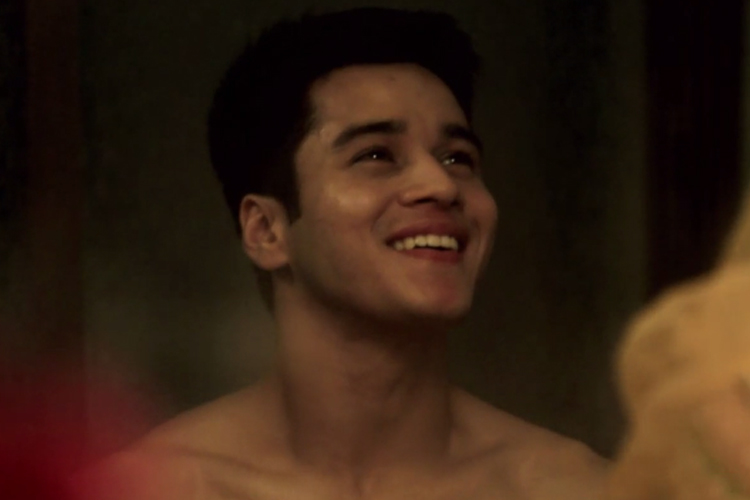 Even though the character of Siddharth is one of the most common archetypes to see, Anshuman manages to impress and is convincing as a casanova and carefree guy inspite of his quintessential chocolate boy looks. 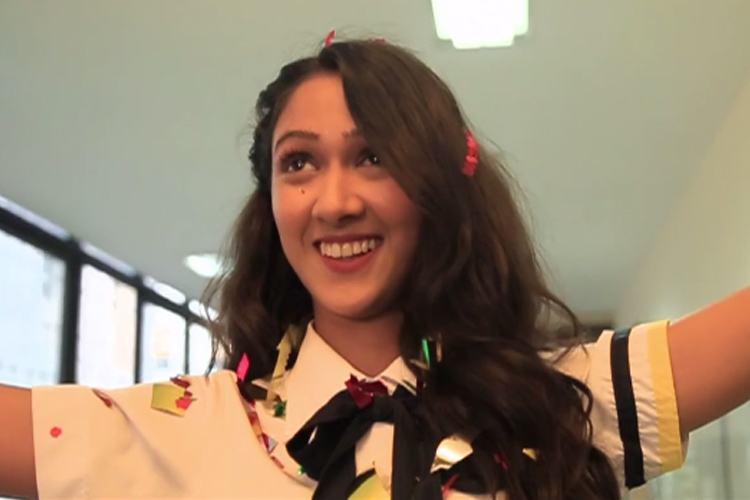 Krissan Baretto as Sarah is the best thing about the show, as in a matter of five episodes, we have already witnessed so many shades of the character. And in the best of surprises, Krissan acts as the innocent and simple girl on one hand and as the high and crazy person when she is accidentally made to consume drugs with utmost conviction on the other hand,
The rest of the cast perform their characters with finesse, where Rohan Shah and Sarah Khatri stand out from the lot.
Rating - **** (4/5)
The Verdict 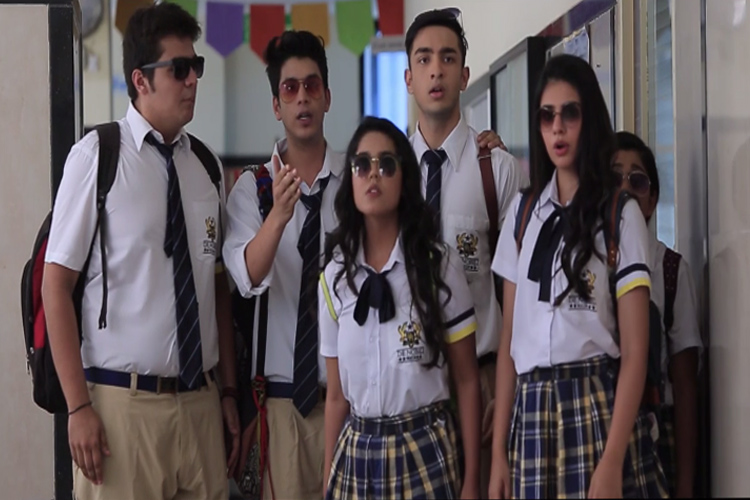 Inspite of some cliches and repetitive instances, Class of 2017 is a worthy watch. It does the novel thing of bringing all of the 'seen' aspects together in an interesting amalgamation and what happens then!

Juhi_04 3 years ago @nmyeddy: I did not watched this show and don't intend to after reading it's reviews but I hope the heroine Sarah ends up with her boyfriend only instead of this womanizer male lead Sid. Why it's always an innocent and virgin girl's job to change a spoilt-brat guy?

nmteddy 3 years ago @angel_juhi04 The only such character I can remember is in the movie Always Kabhi Kabhi, where she ends up with the nice guy after he helps her though a pregnancy scare.

BugheadCrazed 3 years ago Ewww what a sorry excuse for a youth show. No proper storyline, bland wooden mediocre cast. Only sex and wannabes doing drugs :/

latanzia 3 years ago they maker tried to create a youth show but they fail miserable, because instead of focusing on sex they should have paid more attention to the story of the show. to me this is vulgar and tasteless a bad copy of gossip girl

RheaSingh 3 years ago Channel V made youth shows with class - confessions, paanch, sadda haq, o gujariya every show dealth with sex in some kind of way and that was bearable n acceptable. but what is this?? what i can only see is vulgarity cheapness and disgust. i am in my youth as well and who told you guys you can't depict sensuality is aesthetic way no becoz its a mindset that youth always watch dirty things online. so now every production house is doing the same. Grow up guys. please ! entertain us enlighten us. do not spread disgust. thumbs down !

Juhi_04 3 years ago I dare any production team to make a show where the female lead is a casanova who had sex with many guys before settling for an innocent and virgin guy? Hain kisi production team me itni himmat? Don't get why only female leads are shown goody-goody types and bullied by the male lead and his gang? Didn't we saw them enough in Humse Hai Life, Suvreen Guggal, Sadda Haq, Kaisi Yeh Yaariyan and Warrior High?

NK1865 3 years ago @woh_kaattey Totally agree with your point. Plus, though I haven't watched this, it sounds like a remake of KYY with more sex and profanity. I wish they would focus on so much more like the youth's ambitions, struggles and beliefs.

Mystique_Raven 3 years ago pls any1 tell me here...does youth only think abt sex...i thought youth had ambitions, goals n careers to take care of as well.. why r all these tv producers ekta kapoor rashmi sharma rajan shahi making web series that just target sex n nothing else. is this the web meant for ? -_-