BollyCurry is back with the latest edition of Retro Review. We bring to you the movie which not only marked the debut of Bollywood's King Shah Rukh Khan, but is also one of the last few movies of the 80s heartthrob, Rishi Kapoor, as a lead before he moved on to play supporting character roles. 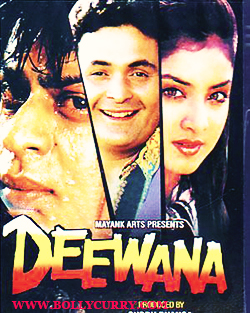 Released on 25th June 1992, Deewana was the second highest grossing film of the year and launched Khan as an action hero. It had Rishi Kapoor in parallel lead, who was one of the strongest actors of his time and Divya Bharti, the then rising star with a bright future. The supporting cast of the movie consisted of veteran actors like Sushma Seth, Amrish Puri, Mohnish Behl, Alok Nath and Dalip Tahil, while it was produced by Guddu Dhanoa and Lalit Kapoor. Along with Khan, the movie also marks the directorial debut of Raj Kanwar who later delivered commercial hits like Jeet (1996), Judaai (1997), Daag: The Fire (1999) and Badal (2000).


The film Deewana revolves around the love triangle of Ravi (Kapoor), Kajal (Bharti) and Raja (Khan). Ravi, a wealthy singer, meets and falls in love with Kajal, who happens to be a big fan. When called back, Ravi marries Kajal and brings her home where his happy mother (Sushma Seth) greets them along with his uncle (Amrish Puri) and cousin (Mohnish Behl). For a while, the happy couple enjoys marital bliss, but soon things take a turn for the worse when Ravi throws out his uncle and his cousin for misbehaving with Kajal and is consequently murdered by the two. The duo throws out Kajal and her mother-in-law, who move to another city and start a simple life. This is where they meet Raja, sole son of a rich father. Raja falls for Kajal and soon gets married to her. But before Kajal could move on, Ravi comes back bringing a storm of confusion for Kajal as she is torn between her two husbands. In between this scenario, enter the Uncle and Cousin wanting the whole family dead. The way in which the whole tangled mess of relationships is solved becomes the crux of the story.

Deewana is not just a typical love triangle story, it is also a story about relationships - about a mother's love for her son, a father's inability to see past his status, about a girl who is stuck between her past and her present. The movie has an immensely talented cast with very well-written dialogues and beautiful songs.

While the movie may seem forgettable to most movie-goers except Khan's fans and cinema buffs, it is quite memorable for its music. Whether it be "Sochenge Tumhein Pyar" sung in Kumar Sanu's voice, picturised on Kapoor, or Khan jumping and dancing on his bike as Vinod Rathod crooned "Koi Na Koi Chaahiye", almost all songs of this movie went on to become huge hits and are still enjoyed by music lovers. The love duets "Paayaliya", "Teri Ummeed" and "Aisi Deewangi" are still remembered for their melodious music and lovely rhythm. The other less famous songs in this album are "Tere Dard Se Dil" and "Tere Isi Ada Pe Sanam". The soundtrack was provided by the duo of Nadeem-Shravan who are famous for albums like Aashiqui (1990) and Saajan (1991).

The movie went on to win many Filmfare awards including the Best Debut for Khan, the Lux New Face for Bharti, the Best Lyricist for Sameer for the song "Teri Ummeed Tera Intezaar", the Best Music Director for Nadeem-Shravan and the Best Male Playback for Kumar Sanu for the song "Sochenge Tumhe Pyar".

Did you know?
While the film is not well known among the current generations, the older generations and movie buffs still remember it for Bharti's expressions, Kapoor's performance and Khan's action sequences and bike dance! We, at BollyCurry, recommend that you give the film a try and do let us know what you think of it in the space below.
Writer: Kalpana K.C.
Editor: Pooja B. and Gunia K.
Graphics: Komal P.
Have a suggestion or comment for BollyCurry? Drop us a PM at BC_Dropbox today!