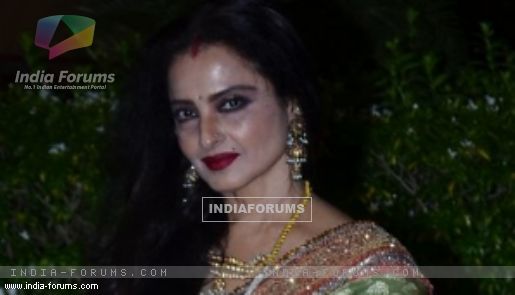 Veteran actress Rekha, who has kept her distance from the small screen, has duly followed the current tradition of appearing on popular TV reality shows to promote her forthcoming release "Super Nani". Director Indra Kumar can't thank her enough.

Kumar, whose films range from the emotional "Beta" to the raunchy "Grand Masti", feels deeply emotional towards Rekha.

"What she has done for our film, she has never done before in her career. She went on reality shows like 'Comedy Nights With Kapil' and 'Bigg Boss' for our film. The impact has been tremendous. Suddenly, new generations have woken up to the phenomenon called Rekha," he said.

Rekha's last television appearance is said to have been on "Rendezvous With Simi Garewal" -- after which she had pledged not to be seen on television unless she did her own show.

"And what a grand welcome she has got on television," said Kumar.

The director, who has worked with Rekha for the first time, says "Super Nani" is a tremendous challenge for her.

"This is a film adaptation of the legendary Gujarati play 'Baa Mari Boundary'. The legendary Padma Rani played the lead in the play. That's a tough act to follow. Only an actress of Rekha's calibre could have pulled it off," he said, and added that all audience members will identify with her character and story.

Curiously, the director comes to this wholesome family saga after the sex comedy "Grand Masti".

"That was another world, another tale, another Friday. We were very clear about making a sex comedy, so clear that we stepped forward to ask for an 'Adults' certificate from the censor board. They were aghast because no producer had ever voluntarily asked for an 'A'."

Now Kumar says he isn't looking at directing another sex comedy for a long time.