Mumbai, Jan 15 (IANS) A rumour that Randeep Hooda has not only taught Sushmita Sen horse riding but is also playing a part in the actress' home production 'Jhansi Ki Rani' has both of them chuckling in disbelief.

'Where do you hear all this? It's complete rubbish,' laughs Sushmita. 'The casting is still in the preliminary stage. No names have been locked in yet,' Sushmita told IANS.

Randeep, who's currently shooting for a new film with another Bengali beauty Raima Sen, is even more forthright.

'I don't know where these reports are coming from. I'm caught up in my shooting and haven't been in touch with Sushmita at all. There has been no talk of roles or horse riding. We haven't spoken for quite some time,' said Randeep. 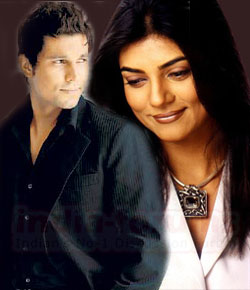 'I'm barely mastering the art of horse riding. Am I equipped to teach anyone the art of riding? In any case, I don't recommend horse riding for Sushmita. There's a lot of dust and pollen from the grass; and hey that could cause severe allergic attacks,' he added.

As for being offered a role in 'Jhansi Ki Rani', Randeep said: 'I've had no offer from her to be a part of the film. If I do get one, I'd consider it professionally just as another project.'

Meanwhile, Sushmita and Randeep's only film together, 'Karma, Confessions & Holi', which is in the making for the last two years, is being readied for release long after the lead pair's relationship is over. The film is being produced Saregama Films.

'Why not? If 'Jab We Met' could turn out to be such a rage after Shahid Kapur and Kareena Kapoor separated, why not 'Karma, Confessions & Holi' after the lead pair has gone their separate ways? Maybe splits are lucky for movies,' said a source.

'Mughal-e-Azam' became an all-time classic. Dilip Kumar and Madhubala had split during the film. And when Kamal Amrohi made 'Pakeezah' Meena Kumari was long-divorced from him,' the source added.

However, the rumour that 'Karma, Confessions & Holi' is going straight to a DVD release is strongly refuted by B.R. Sharan, chief creative officer, Saregama Films.

'We're almost ready and 'Karma, Confessions & Holi' should be in theatres by April-May 2008,' said Sharan.

Randeep is, however, unaware of the exact plans of the film's release.