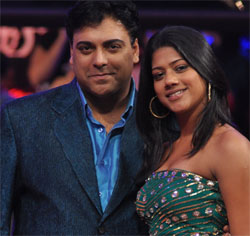 Ram Kapoor seems to be having a bad week, starting with the very mediocre performance, to getting ill.

According to our source, "Ram suffered from food poisoning recently and was down and out for nearly two days".

We called up Marischa, Choreographer of Ram who said, "Ram was on complete bed rest for two full days, and I was really getting tense. We have to complete our rehearsals within a time period and with two days gone, we only had minimal time left. But Ram recouped well and even picked up his steps quickly".

Talking about the next week's performance, Marischa quips, "We have been given a hurdle by judges and we have used it as a prop in our act. Initially, it was difficult for Ram but he has managed to learn it".

Hope Ram recovers on time and pulls up his socks!!

rpmenon 11 years ago Poor Ram...Please take care of your health and come back soon!!

magicalmelody 11 years ago Hope is gets well soon!!!
wish you a fast recovery!!!

divan 11 years ago Get well soon...why give them a hurdle..what are the judges trying to prove...

Lord-Mangeshwar 11 years ago Happy Ram Navmi to everyone!

-Sara. 11 years ago Awww hope our Ramu gets better soon Food Posning is bad even a had it to when a was 13