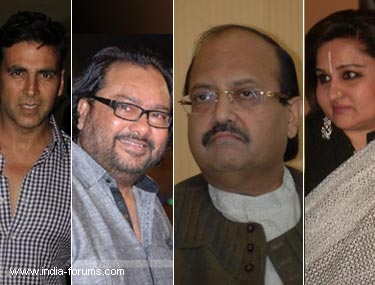 Rajesh Khanna, one of the most successful stars of Hindi cinema, has been undergoing treatment in Lilavati Hospital here for eight days now but the former superstar had very few visitors.

According to sources, the 69-year-old, is doing fine. In the last one week, the celebs from B-town who came to see him include yesteryears actress Reena Roy, former Samajwadi Party leader Amar Singh, his close friend Anita Advani and former girlfriend Anju Mahendru.

"He is staying on the 11th floor which is a VIP floor and has a caretaker as well," a source told IANS.

The actor has been battling health issues since April when he was admitted to the hospital due to weakness and fatigue and was discharged in three to four days.

Last month his manager Ashwin told IANS that Rajesh Khanna had stopped food intake, but a day later the actor had come out and greeted mediapersons and fans assuring them he is fine. He waved at them from the balcony of his house, Aashirwad on Carter Road in Bandra June 21.

Fondly known as 'Kaka' by his fans, Rajesh Khanna married Dimple in 1973. They separated in 1984.

After giving hits like "Aradhana" and "Amar Prem", the actor was out of the limelight for many years. He has recently acted in a Havell's ad campaign.