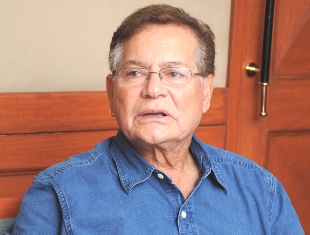 The veteran writer Salim Khan who has been on-board as the creative consultant on the Star Plus' Mahabharat, understands the epic and its characters better than anyone else in the entertainment business.

A self-confessed admirer of the Mahabharat, the 78-year-old reveals that he learnt the art of giving that 'twist to the tale' from this ancient piece of literature. In this candid chat, he tells us why he feels his son, Salman Khan, is like the warrior Karna (from the epic):

What cue have you taken from the Mahabharata?
I've read the Mahabharata several times since I was young... not as a religious book, but for knowledge, and I realised that in this epic, a lot of small twists have bigger impacts later " be it Bhishma's pledge or Yudhisthira announcing the death of Ashwatthama (where he doesn't mention that it was the Ashwatthama elephant and not Dronacharya's son, Ashwatthama, who has died). In many of my stories, I used similar twists that have larger impacts later, for instance, the coin in Sholay (1975).

Why do you say Salman is like Karna's character?
Just like Karna, Salman has a complex character. He is fighting from the wrong side... he is silent and has inner conflicts to battle. In fact, during the making of Karan Arjun (1995), Salman had a choice to play either Karan or Arjun. He asked me, and I said Karan because Arjun might be a principled, disciplined man, but he doesn't have the shades that Karan does.

Is it true that you are working for free for Mahabharat?
I am a consulting writer for the TV show Mahabharat. The show's producer, Siddharth Kumar Tewary, offered me a good price, but I am not taking any money as I had a firm faith in Siddharth & the channel. I've earned a lot of money in my life and I want to give back to society now. A lot of people from the industry come to me, saying that they are unable to write the climax of their films, so I guide them.

6 years ago So is he the mastermind of all the distortions that happen in our beloved star mb??
Lol!!

+ 3
6 years ago Karna The Great personality is compared with Sallu miya LOLZZ
I don't know what to say abt this :p

+ 2
6 years ago if Karna is like Salman why he get so less importance in the star plus Mahabharat..we Karna fans barely get to see our hero..well he is not at all Salman of the show and the show is highly distorted

6 years ago So basically, you play a lovely role is the distortions the serial presents.