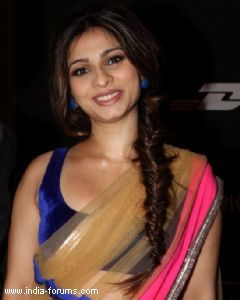 Whatever may have happened inside the 'Bigg Boss' house, now that the show is over, actress Tanisha Mukherjee is not ready to either justify or clarify her proximity and camaraderie with co-contestant Armaan Kohli, who seemed to be more than her 'best friend' on the popular reality show.

They cosied up, gave each other their support, smiled and laughed together, and more importantly, eased up each other's stay in the show.

Once out of the show, all eyes were on them, questioning their relationship status.

When asked to Tanisha about this, she said: "Armaan is my best friend. He has helped me inside the house and outside as well."

Nevertheless, the 36-year-old whole - heartedly credits Armaan for helping her survive in the show till the end - for as many as 105 days under the prying eyes of 84 cameras 24X7.

"First and foremost what helped me stay (till the finale) was my upbringing, then it was the confidence that I have in myself. It was also because of my friends - Armaan and VJ Andy that I was able to sustain for so long," said Tanisha, who took the first runner-up spot. Gauahar Khan won the show.

Asked if she ever did anything solely for the camera, the 'Neal N Nikki' actress completely denied it by saying "that's not who I am".

"People had a preconceived notion about me and I wanted to show them who I really am, and that's why I chose to come on the show. But I never used the camera or did something solely for it."

Post the show, her eyes are set on the 'entertainment industry', and that just not translate to Bollywood alone for her.

"You never know, I might write a book, or become a part-time journalist. But one thing is for sure that I will be a part of the entertainment industry," said Tanisha, who is the daughter of veteran actress Tanuja and younger sister of talented actress Kajol Devgn.

khushboo_kzk 6 years ago Tanisha darling please grow up...we're not fools here, we have seen your coziness with armaan in big boss and its clear that you two were more than friends.so wants wrong in expecting your relationship in public. kaushal and gauhar also accepted...or you used armaan as a ladder to stay in big boss house till finale. i thought you were a nice girl.
and you said that its your upbringing which helped you to stay in BB house, really? why saying this what do you mean that all other contestants does not have that such high class upbringing which you have, and its make you more deserving than other to stay in finale.but sorry to say Tanisha madam, we already seen your high class upbringing on bb...if you have some respect to your family, you never being so cozy with armaan and maintain some distance with him,and now after using him to staying in bb house till fianle, you are calling armaan "just friends". it clear that two were much more more than friends.or i can say friends with benefits...

desicrowd 6 years ago I don't give justifications... I just give back massages...

greatsaleen 6 years ago I am confused - how is being from the filmy background make you a high-class background. From what I know, many "high-background" families did not like ot be associated with film families. It was only in recent times that the reputation has escalated. Even now may families don't like their children to take up acting as career! But from the days of Tanisha's grandmother, it was one of the worse industry for women.

abhina_roks 6 years ago Ok first of all when i read people's comments, i felt they are very mean and harsh on her even though im not her fan at all..

But when i read the article...i felt why she always have to mention about her upbringing like this "First and foremost what helped me stay (till the finale) was my upbringing...:" I mean common Tanisha, you want to always show that others do not have such high class family background..
she never forgets to brag about that...

And we have seen how much confidence you have in yourself...and how much dirty games you played with ppl...You even wanted to control armaan not to talk to kushal and gahaur but made him talk to andy...neverthless you can never control armaan...we have seen that..

Gauahargeous_N 6 years ago Tanisha is such a loser!! losers like her never win! no one wants to hear your clarifications anyways! Tanisha's so delusional in all her interviews! Gauahar rocks and deserved to win BB7!

.FemmeFatale. 6 years ago Tanisha,u have been very dignified thruoput ur stay in Bigg Boss. So,dont give a damn.

NabzKaJenDMG 6 years ago Y do i find all her statements nothing but ridiculous..LOL is it necessary to make an utter fool of urself in public?Anyways,what about TanMan louweee??Is it mere friendship now?ROFL oh well,as expected ;) Fakeness got its new definition LOLLL..Sometimes i fail to believe how like exactly how is this woman Kajol's sister? :o Tsk tsk

KoffeeLover 6 years ago People are talking as if they know Kajol and she is the best person on earth. The Kajol you know is the characters she has played on screen. How do u know she is better than Tanisha?
Respect Tanisha for staying silent and dignified. She could have pounced on the opportunity to get free publicity with Armaan but she is choosing to explore the relationship seriously.
And they are very much together. Google and you will see their new years pics with Tanuja, Armaan and Andy. You lot are more worried about her family image than her family itself who have welcomed her with open arms. Heights of narrow mindedness. No wonder we have not progressed as a society.

Ninja. 6 years ago 'Classy' people don't give justifications, clarifications. Who knows it better than her?