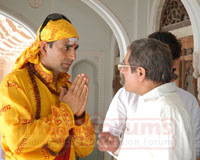 Being promoted as a psychological-thriller with comic elements, T-Series' "Bhool Bhulaiyaa" is one of the most awaited movies in the coming week. So when pitted against Yash Raj's "Laga Chunari Main Daag", chances are the masses would make a beeline for "Bhool Bhulaiyaa" with its eclectic cast of Akshay Kumar, Vidya Balan, Shiney Ahuja, Ameesha Patel, Paresh Rawal and Rajpal Yadav. Directed by Priyadarshan and produced by Bhushan Kumar and Krishan Kumar, the film's song "Hare Ram Hare Ram" has almost created a cult following. Hop into an
Featured Video

auto-rickshaw or walk into a restaurant, the song booms from the speakers just about everywhere.

A poll on indiafm.com has shown that an overwhelming 70 per cent of Indian cine-goers would prefer to watch "Bhool Bhulaiyaa" to "Laga Chunari Main Daag". Check out the link and vote for the film you want to watch first.