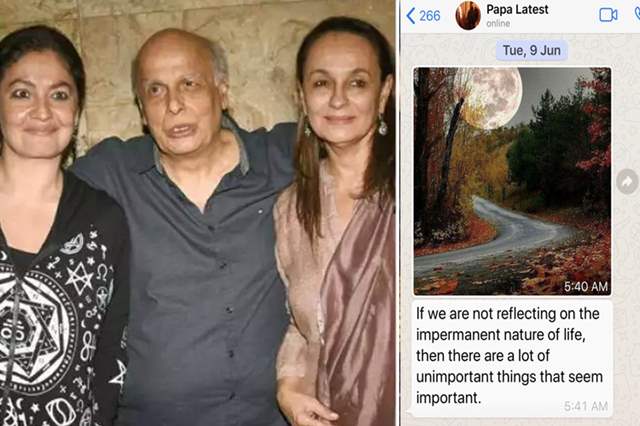 The Sushant Singh Rajput saga continues and while everyday is a new day in terms ofthe developments that keep happening in the case, some of them have actually been slammed for merely being opportunistic in one way or the other. As we know that filmmaker Mahesh Bhatt's bond with Rajput's girlfriend and actor Rhea Chakraborty has already been questioned constantly, a recent report was slammed too.

On Twitter, Pooja Bhatt reacted to a tweet made by a social media user pointing out that the conversation between Mahesh Bhatt and Rhea Chakraborty is normal between two individuals. As the user questioned the news channel about what is so explosive in the chats, reacting to the tweet, Pooja Bhatt tweeted, “Interestingly,the message @IndiaToday refers to as ‘most explosive revelation’ is a message that my father also sent me & countless other people on his phone list on the same day(June 9) & subsequently posted on Twitter as well (26-6-2020) get your facts right @IndiaToday.”

Reacting to the same tweet, Soni Razdan also replied saying, “Yes true. Here is mine. We get them everyday. When will news channels actually give us real news and not fabricated spin-offs. Most seem to have turned into uglier more salacious versions of Stardust and Cine Blitz.” Sharing a picture of her phone with Mahesh Bhatt’s number saved as ‘Mahesh Private’, Soni Razdan backed Pooja Bhatt’s tweet and shared her message that she too received from her husband on June 9 and mentioned about getting them every day. She then also went on to take a dig at news channels and lashed out at them.

After CBI has taken over the investigation, they have collected evidence from Bandra Police and they had cook Neeraj for questioning. Rajput's friend, Siddharth Pithani and the cook Neeraj were also taken to recreate the crime scene and investigate further by the CBI.