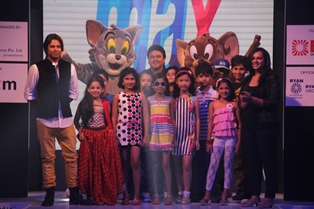 One of the most eagerly awaited fashion events took off with a fabulous start in Mumbai at the Lalit Intercontinental on 18th Jan. After two years of its conception, the second edition of India Kids Fashion Week, a joint venture by Events Capital and Craft world Entertainment saw children walk the ramp, emerging as rock stars through their fierce attitude and innocent smiles. It was indeed a kid's fantasy-world to see cute adorable toddlers in trendy, colorful designer ensembles and edible organic make up. The first day of IKFW saw creations by NGO Khushi, Maxx, Libero, Pooja Jhunjhunwala, Sho Sho Bella, Sheena Creations and Kirti Rathore for F Atalia.

Adding to the glitterati of India Kids Fashion Week, were POGO and Cartoon Network mega stars who walked the ramp for the first time ever! Superhero Chhota Bheem and his best friend Chutki from POGO and uber cool student Kris (from Roll No. 21) and the evergreen Tom and Jerry from Cartoon Network razzled and dazzled on the ramp entertaining kids, parents and everyone at the event.

Day.1 Kick-started by supporting the cause of empowering children with learning disabilities, cerebral palsy and autism through a fashion show organized by NGO Khushi. Mandira Bedi was seen supporting the kids on the ramp.

The commencing show showcased creations by renowned kids wear brand Max. The collection for young girls had lightweight fabrics in a mixed color palette ranging from monochrome to bubble gum pinks, ochre and blue, spearmint and vermillion while Double denims' was the theme for little boys' collection. Versatile TV actor Ali Asgar, immensely loved by all as Dadi' from Comedy Nights with Kapil along with the hilarious and legendary cat and mouse duo Tom & Jerry from Cartoon Network accompanied the little children on the ramp. 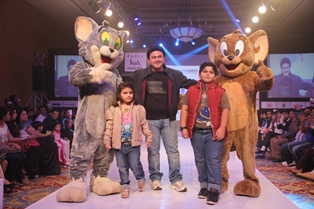 Libero's show caught maximum attention from the audience:  for the first time ever, toddlers between the age of 1.5 to 2.5 years strutted on the ramp showcasing diapers by Libero! This show garnered maximum attention through the models seen on the ramp. The confidence with which the babies walked on the ramp showed promising signs of soon-to-be superstars! Model and Actress Aditi Gowitrikar was seen accompanying the mini-rock stars as they promoted their diapers with flamboyance.

The fashion fraternity is very close-knit. While there is immense competition in every professional field, renowned designer Rocky S was seen cheering on and completely supporting his protege designer Pooja Jhunjhunwala and Rachna  as she showcased her mythology-inspired collection for children. Pooja was accompanied by the biggest Indian superhero - POGO's very own Chhota Bheem who accompanied the designer and acknowledged his little fans.

Named after her daughter, Dubai-based designer Sarah showcased her collection 'Sho Sho Bella' which included outfits that make kids feel like little princesses. Inspired by her own princess, the collection reflects the designer's love and adoration for her daughter.

The show by Sheena Creations created a mood to party and unwind through their collection showcasing party wear for little boys and girls. Ace choreographer Terrence 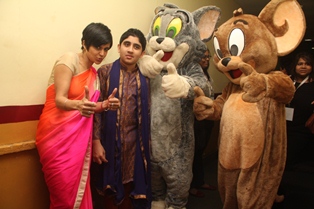 The grand finale for the day one stayed true to its name with Kirti Rathore showcasing her collection dedicated to cancer patients aged between 4-14 years. These little children walked the ramp for Kirti's show along with celebrities Kushal Tandon, Nandish Sandhu, Angad Hasija and Vivek Oberoi. Bigg Boss winner Gauahar Khan was seen cheering for her beau Kushal Tandon in the front row. The front row for Kirti's show was also graced by the presence of versatile actor Jimmy Shergill.

malluangel 9 years ago noticed noone commented, cuz of course its not bigs stars etc.
k
well all the best to them, if they really do promot different talent and all kinds of it, cheers to them