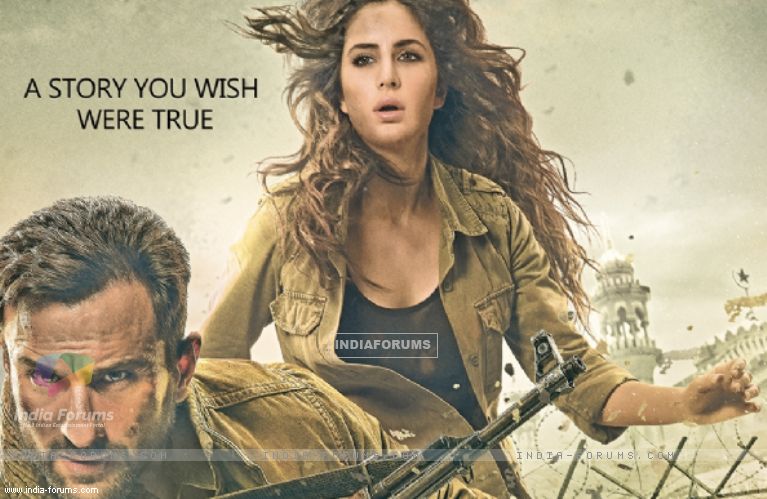 Kabir Khan's directorial 'Phamtom' has been banned in Pakistan. The ban was applied after a plea was filed against the movie by the JuD Chief and mastermind of Mumbai's 26/11 attacks Hafiz Saeed.

On 20th August the Pakistani Court banned the release of Saif Ali Khan and Katrina Kaif starrer 'Phantom' following a plea filed against the movie by Hafiz Saeed alleging that the film that's set on post-26/11 attacks, contains "filthy propaganda" against him and his outfit.

After hearing the arguments of Saeed's counsel and the government law officer, Lahore High Court judge Justice Shahid Bilal Hassan issued the order to ban the release of Phantom in the country.

This is not the first time when Indian movies have faced a ban in Pakistan. In the past, movies like 'Agent Vinod' and 'Ek tha Tiger' were also banned from being screened on the big screens. However, they are available in Pakistan in the form of CDs and DVDs.

+ 3
5 years ago movies about dacoits like phoolan devi were made but I dont think people of that state or community were offended because they are not like that! This movie is theoretical and about a terrorist, i dont understand why people who are not terrorists are getting offended! if you arent in the business of terrorism, you shouldnt be offended by a movie about a terrorist...

+ 2
5 years ago @intrepida
"Good hearted" Pakistanis are sick and tired of being tagged as terrorists!
The release of bangistan was stopped or the actors playing the roles required extra protection coz some " good hearted" hindus were offended as to how they could be portrayed as terrorists but these people portray the whole nation, race, religion as a terrorist! How is that fair

+ 3
5 years ago I doubt that two people in Pakistan represent the entire nation and culture of Pakistan, one of which is a terrorist; In most nations, alleged terrorists are captured and placed in jail...I dont know why good hearted Pakistanis are getting offended that a movie is made about a terrorist

5 years ago Very Good it must be banned. Why we will goana see the movie which is against us.

+ 2
5 years ago Ohh plzzz enough of this same news everywhere come on wat u expect if Pakistan have made an anti Indian movie would u have allowed it ?? O actually Pakistani movies r still not shown in India sadly but Indian movies r shown in Pakistan lol

+ 2
5 years ago Should have been banned world wide.
When will film makers learn

5 years ago bin roye banned in a state not in whole country..becoz of some political goons like MNS but its a whole country wide ban...pak govt should come to globalization thoughts..youtube ban in pak...uff

+ 2
5 years ago No freedom of expression, no freedom of speech
They always do these things, they ban movies who depict the reality of their countrymen.

+ 4
5 years ago And Can i ask why was Bin Roye banned in Mahrashthra?