View Profile
Celina Jaitley is all set to stag 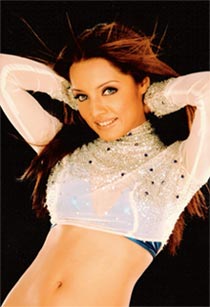 Featured Video
e her grand come back with Ganesh Acharaya directed film, 'Money Hai To Honey Hai', after having disappeared from the scene for some time with her International project 'Love Has No Language'. When I meet her for this interview at her spacious, but well decorated house in the suburbs, Celina talks in length about the film, and says that it is a story of six friends, who are strugglers in their own respective fields. "I play a fashion designer, Shruti Pandey who has graduated from NIFT and yet struggles while trying to sell a pattern of her own to export houses", Celina quips at the outset.


The film "Money Hai To Honey Hai", Celina states, sets out to drive home the subtle message that today's education system really sucks and how. "It is a comical representation of today's education system and stars besides me, stars like Govinda, Aftab Shivdasani, Upen Patel, Manoj Bajpai, Ravi Kishen and Hansika Motwani. Each of us has a different background as a struggler in the film".

Yet another film with which Celina is quite excited is Subhash Ghai's 'Hello Darling' in which she plays a young catholic girl called Candy Fernandes. "Candy is a little dumb when people try to talk in double language to her .The film dwells at length about how it is wrong on the part of people in society today to judge a woman on the basis of what she is wearing. It is a chic film and I enjoyed working with Isha Koppikar and Gul Panag", says Celina. The actress then hastens to clarify, "Just because there are three women in Hello Darling like there were in Charlie's Angels, it does not mean that you should jump to the conclusion that Hello Darling is a rehash of Charlie's Angels".

Celina states that she can identify herself with the role in Hello Darling completely. "People feel that I am anglicized and cannot talk in Hindi when the fact is that I am from a Hindi medium school background and very good in Sanskrit and Hindi. I may flaunt blood costumes on the screen, but am conservative at heart and a very simple and down to earth girl who is rooted to the family".

Celina is happy that she gets to play a comic role in Golmaal Returns. "I am a young well educated girl who is doing her graduation in Microbiology. Just as Kareena Kapoor's character is named Ekta Kapoor, my character is named Mira Nair, though it has got nothing to do with filmmaker Mira Nair. I have been teamed opposite Shreyas Talpade in the film. The best thing about Shreyas and me is that we have very good timing to carry off the comedy scenes. I have been a great fan of Sridevi as far as comedy roles are concerned", states Celina.

Celina confesses that she realized that she had a comic streak to her as an actress when she acted in 'No Entry' in which she had a zany comic role. "After No Entry, I have done a spate of comedy films like Apna Sapna Money Money, Tom Dick & Harry, Money Hai To Honey Hai and now Golmaal Returns"

After Apna Sapna Money Money and Hello Darling, Celina has been repeated in Paying Guest by Mukta Arts. "I am lucky to have been singled out by Ghaisaab for a third film in his production company. I play a cry baby architect in 'Paying Guest' which by the way is being directed by Paritosh Painter. I have been a fan of Paritosh who comes up with excellent plays. Besides the Mukta Arts, I have also been signed for a three- film contract by Kumar Mangat, Ashtavinayak and Suneel Darshan"

Celina is quite excited about her recent foray to the West with a film called 'Love Has No Language' directed by Ken Khan. "I play an Indian Bengali girl brought up in New Zealand. My parents played by Kiran Kumar and Rati Agnihotri are very orthodox and want me to marry an Indian boy of their choice, whereas I am in love with a Kiwi boy. I am kiwi by nature and hence am stuck between my family and the boy played by Ben Mitchell. with whom I am in love with. It is a modern story"

It is interesting to note that Celina was slated to act in yet another English film called 'Quest of Shehzada'. "However because of the writer's Strike abroad, the film has been kept on hold and the shooting is yet to start. Though the director is yet to be finalized, Orlando Bloom is being considered as an actor", she states as she concludes.