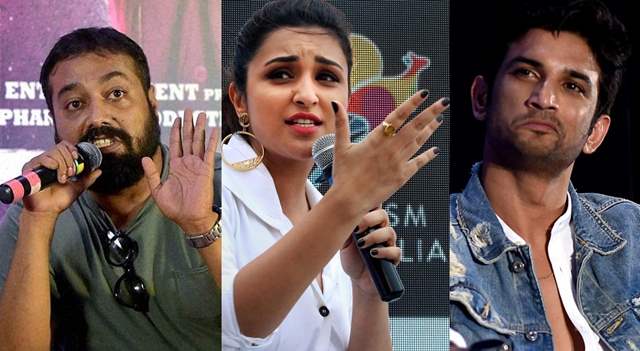 Anurag Kashyap has been making headlines for quite sometime now and recently during his interview with Faye D'souza, he made a lot of revelations and even put straight many records.

The filmmaker recently tweeted about late actor Sushant Singh Rajput wherein he shared how he ‘ghosted’ him a couple of times after agreeing to a project.

Now, during his interview, he shared that the first time SSR left him hanging was at the time of Hasee Toh Phasee in the year 2014. He had roped in Sushant for Hasee Toh Phasee but he went ahead and signed a three film deal with Yash Raj Films. His first film with them was Shuddh Desi Romance co-starring Parineeti Chopra.

He then went on to share more details about all that happened behind the scenes, further revealing that Parineeti earlier did not want to work with Sushant.

Speaking to journalist Faye D’Souza, Anurag said, “He was supposed to do the film (Hasee Toh Phasee) and we had to find an actress and we reached out to Parineeti Chopra. She said ‘I don’t want to work with a television actor’. So we explained to her that who Sushant Singh is, he is doing Kai Po Che, he is doing PK and by the time Hasee Toh Phasee comes out, he will not just be a television actor. And she was doing a film called Shuddh Desi Romance and she must have gone and spoken to YRF, they called him and said ‘Why don’t you come and do Shuddh Desi Romance and not do that film?’ And he disappeared on us.”

Anurag said that everyone understood that going with YRF was a better deal for Sushant and so not one opposed him for it. Sushant worked with Parineeti in Shuddh Desi Romance while she worked with Sidharth Malhotra in Hasee Toh Phasee.

“Years later, in 2016, before the release of MS Dhoni: The Untold Story, Mukesh went to Sushant and said, ‘Anurag has written a script looking for an actor who can play someone based out of Uttar Pradesh.’ Dhoni released, became a success and he never called me back. I was not upset, I moved on, I did Mukkabaaz,” the filmmaker said in an interview to NDTV.

Anurag also said in his interview to Faye: “Sushant Singh Rajput had six blockbusters. It would take another four years of films not working for him to written off totally. A lot of people at that time didn’t know what he was going through. It is only now that it has come out that he was dealing with depression. But the problem the industry had with him at that time was that he was ghosting people. The problem was not that he would misbehave. People who would meet him would say Sushant Singh Rajput is a great boy, who behaves very well, who is sensitive, who is nice. But he would jut ghost and disappear.”

Anurag added that he knows Sushant was trying to change this part of him. He changed his agencies, moved from YRF to Corner Stone. Anurag said that Sushant’s new manager reached to him three weeks before the actor’s death, asking for work. He said that Sushant told his manager ‘If you take my name to Anurag, he won’t answer your call’. Anurag believes that Sushant was also feeling guilty for disappearing on him.

maaneet4evr 1 months ago and parineeti was a national award winning actress! such narrow mind thinking! :)

sanjana 1 months ago Sushanth was a gem. Very difficult to find such a multi talented person in the Bollywood industry. It is a joke Parineethi chopra saying this. How many fils she has acted. It is sad Sushanth the gem was never understood in properly. #justice for Sushanth