View Profile
Fans of the Hera Pheri romp may be disappointed to know that the latest buzz around the series is that Akshay Kumar and Paresh Rawal may not be present in Hera Pheri 4! 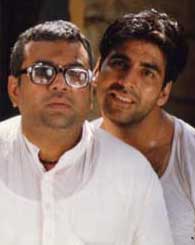 Featured Video
third movie, already in pre-production, was originally titled International Hera Pheri before being renamed as Hera Pheri 4 to intentionally leave a mysterious gap between the second and third installment.


Produced by Feroz Nadiad-Wala, the project has been doing the rounds since the success of Phir Hera Pheri and was finally set for an end of 2010 release but has further been delayed because both Akshay and Paresh are unable to provide the necessary days for shooting.


Despite huge commercial success and awards in the Best Supporting Actor and Best Comedian categories, the buzz is that both actors have lost interest in the project and aren't looking forward to another Hera Pheri film.  A source revealed that it was actually Nadiad-Wala who had delayed the shooting of the movie with the hopes of being able to convince Akshay and Paresh.


But if all doesn't go to plan, we may just see Sanju and Nana stepping in!  Both actors have good comic-timing and are already working with Nadia-wala for the Hangover remake and the Welcome sequel respectively.


But can we really have another Hera Pheri without Akki and Paresh?  Let's hope we get our original Raju and Baburao!