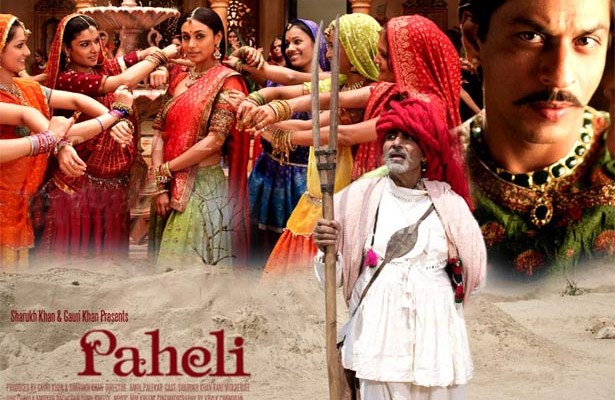 It's been a decade since the release of "Paheli" -- and its lead actor Shah Rukh Khan has thanked megastar Amitabh Bachchan for agreeing to do a cameo in it.

While Amitabh took to micro-blogging website Twitter to share: "10th Anniversary of 'Paheli' a guest appearance in SRK film", Shah Rukh thanked the "Piku" star for being part of the film.

SRK wrote: "@SrBachchan will never be able to thank u enough for all the time u took out from ur extremely busy schedule to come & shoot for the film."

+ 5
5 years ago Such a horendous movie i saw in theatre and a total time waste. I agree wuty itsokaysammy the movie was poorly made. Totally agree about kank also.

5 years ago This was a well made and fantasy style of movie. In answer to the above comment of this movie or Kabhi alvida giving out the wrong message, all i have to say is that when u fall in love with someone else, is it right to stay with your partner? when u would both be miserable and make your kids miserable too. Everything is not black or white and even though i would not condone it, reality can be different.

+ 4
5 years ago it was one of the real trash movies of bollywood.. it is not necessary that if you love someone you are always right..
the character of Rani mukherjee was all wrong in this movie..i wonder why people support movies like this and Kabhi Alvida na kahna.. they teach you wrong things.. just because it has SRK n rani.. or srk n kajol.. doesn't mean storyline is really good..

+ 3
5 years ago I just love this movie so much. It has everything. a beautiful storyline and wonderful direction and acting.this kinds of sensible movies r so rare in this time.its been 10 years. still the apeal of this movie is so fresh nd new to me everytime i sea. 1 of the best act of SRK and Rani Mukherjii