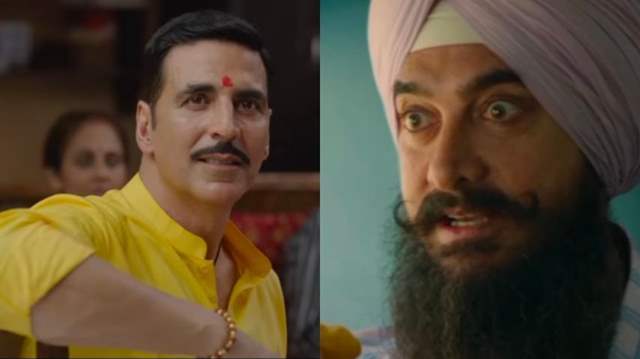 Akshay Kumar's upcoming film 'Raksha Bandhan' attracted all eyeballs yesterday as the makers released the trailer of the film. However what became the talk of town was the clash of Raksha Bandhan and Aamir Khan's Laal Singh Chadha as both films are set to be released theatrically on August 11.

The Kesari actor stated on Tuesday that the box office competition between his movie Raksha Bandhan and Aamir Khan's "Laal Singh Chadha" was "not a fight," but rather the result of two terrific movies able to work together. Due to delays brought on by the COVID-19 pandemic, Akshay claimed that the release of two movies in the same week is "normal."

Talking to the media Akshay said,

"It's a big day. The film is releasing around the holidays, (the festival of) Raksha Bandhan will be around. Due to COVID-19, there are a lot of films that are waiting to be released."

The 'Atrangi Re' actor continued saying,

"Since there are so many films, it's only natural that two films are releasing in one week. It's not a clash, we are coming together, trying to bring our films to the people. I hope both the films have a good run".

Directed by Aanand L Rai, the film follows Raju (Kumar), a sweetshop owner who is struggling to get his four younger sisters married.

The movie features Sadia Khateeb, Sahejmeen Kaur, Deepika Khanna and Smrithi Srikanth in the role of Kumar's on-screen sisters. For the unversed 'Raksha Bandhan' marks the second collaboration of Kumar and Rai, following 2021's 'Atrangi Re'.

+ 10
1 months ago I would watch RB in theaters rather then LSC. Forrest gump ka remake nahi banna cahiya tha. Why ruin a legend movie?