View Profile
If things were'nt heating up already, the latest twist in the Piryanka Chopra-Aishwarya Rai-IIFA tale is the new revelati 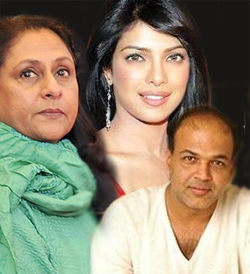 Featured Video
on my Jaya Bachchan.
Recently, Ashutosh Gowariker had raised questions over the choice of Best Actress award being given to Priyanka Chopra for 'Fashion' instead of Aishwarya Rai for 'Jodhaa Akbar' on the IIFA stage.
Jaya Bachchan has spoken out in the media that it was her opinion to raise the question of 'Why Aishwarya has not received any award?' on the IIFA stage and had prompted Ashutosh Gowariker to bring open their unhappiness.
Interestingly, Jaya Bachchan has not seen the movie 'Fashion' and hence has no clue about Priyanka's performance in the movie.
We wonder how she was able to reach the conclusion that her bahu was better in the performance tha Piggy Chops without revieweing it herself??
Or was it just a case of sasu-ma supporting bahu darling and not a critic judgement? Either way, we find this behaviour highly immature and biased.