View Profile
After their much successful film Hum Saath Saath Hain, Salman Khan and Saif Ali Khan slowly drifted apart. Of course, there wasn't any brawl between them - they just lost touch! But now, all thanks to our very own Bebo a.k.a Kareena Kapoor, 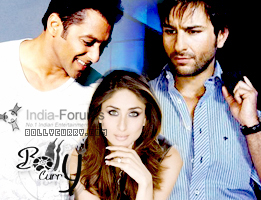 who is co-starring in the Salman starrer Bodyguard, these two Khans are back together!
Flying birdies from the sets of Bodyguard tell us that the two Khans have been bonding way too much; culprit - Bebo's never ending phone calls with beau Saif! Apparently, over one such conversation Salman snatched the phone from Kareena and the two Khans caught up and their friendship seemed to have resumed from where they left off!
Since then, Salman and Saif began chatting casually - and seems like Salman also assured Saif that till Kareena is shooting for Bodyguard Salman will remain true to his character and act as a Bodyguard to her - he'll make sure that she's been looked after.
This made Saif even warmer towards Salman that once during his shooting schedule in Film City, Saif interrupted the shoot when he heard that Salman was also shooting there and this resulted in a cool get-together!
Well, let's hope this star friendship stands the test of time!