Neetu Chandra, the young actress from Bihar , performed so well in "Garam Masala" that film-maker Madhur Bhandarkar took her in "Traffic Signal". And there has been no looking back for her since then. The budding star is now busy polishing her acting and dance skills to get a stronger hold in tinsel town. She tells us about her tryst with comedy, her experience on the sets of forthcoming movie "One Two Three" and her association with UNICEF.

Q: What are you doing these days?
A: I'm busy shooting for "One Two Three" in Mumbai. At the same time, I'm leading in lyricist Swanand Kirkire's play "Aao Sathi Sapna Dekhe".

Q: Tell us about the film "One Two Three".
A: It's a comedy. The film is produced by Kumar Mangan, while Ashwini Dheer, the director of comedy television serial "Office Office", is the writer-director of the film. I'm doing great comedy in the film. I like my character and am enjoying it. I have Suneil Shetty, Tanisha Mukherjee, Esha Deol, Paresh Rawal, Tusshar Kapoor and Upen Patel as co-stars. 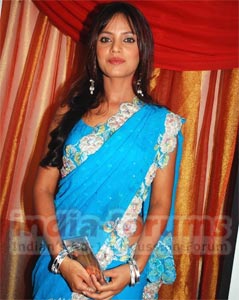 Q: What character are you playing in the film?
A: I'm playing a jat police inspector. Every scene in the film is comic. I suggest that the audience leave behind all their worries at home and return from the theaters fresh after enjoying the three-hour laughter roller-coaster.

Q: Was there any particular preparation for the character?
A: I have a sports background. So my natural body language matches a lot with the demands of the character. So, I didn't need any training or preparation. But yes, I had to learn the Jat language. I had no clue about the language before. My brother, who's in Delhi, knows it well. So, I learnt it from him and from some of my friends. I used to practice speaking in the language with them. The accent is the life of the character and it was a challenge for me. There are very few movies in our industry where an actress gets to play a police inspector, that too a comic one.

Q: Did some people mistake you for a real inspector?
A: Yes. We were returning to our hotel after pack-up. On the way, some policemen had blocked the road. I was in the first car, with others following in vehicles behind me. I was still in my uniform as we used to change in the hotel only. When my car neared the barricade, I thought of playing a prank. I almost barked them to open the gate and to my utter amazement one policeman saluted me and obeyed my order. Unfortunately, the rest of the people in the cars following mine had to walk to the hotel. It was such a funny incident that I would never forget it in my life.

Q: How did you enjoy doing comedy?
A: I started my career with comedy "Garam Masala". "Traffic Signal" was a dark comedy. And my present film is also a comedy. It's a different issue that my character got entangled in between John and Akshay's capers in "Garam Masala". Now I am enjoying doing comedy on my own.

Q: "One Two Three" is a multi-starrer. How was the experience of working with your costars?
A: I enjoyed working with them. Samira, Esha and Tanisha are not only versatile actresses, they are also good friends now. My experience was different with each of them. But I can't really say who I bonded with the best. This is my second film with Pareshji. He played quite a serious character in the comedy "Garam Masala". We both have made up for that in "One Two Three".

Q: What are you doing in the Southern film industry after "Godavari"?
A: I'll do two more films. First is "Daawat", directed by Baiki Venkatesh. It's based on female characters. A theatre artiste, Shakeen, is acting with me. The other one is Puri Jagannath's film which yet to be named. Puriji, one of the finest directors down south, offered the role just after the Film Fare Awards. He got a Film Fare Award for the best director of the year for his much-hyped "Pokhri". Prabhu Deva is now re-making the film under the banner of Boney Kapoor. There would be a new face – Ravi Teja – with me in the forthcoming film of Puriji.

Q: Have you signed any film with Priyadarshan?
A: I can't confirm it right now but it's in the process. You may see me in his film.

Q: Would you like to tell us about your other projects?
A: I have signed a few deals, but I don't have the permission to talk about them right now. I would like the films to be announced first. You'll know about them by November.

Q: You are the youth icon of UNICEF. What are you doing for the organization these days?
A: See, I am pretty busy with my four Hindi and two South-Indian films right now. And I don't believe in tying up with a reputed social organization just for publicity. I step in only when they need me. Generally, I don't like to talk about my work with them either. I believe you should not shout out from the rooftops when you are doing something for the society.

Tusshar Kapoor confirms not getting married ever

Kabir Bedi on his son’s suicide, bankruptcy: “Went through ...