At the end of this month, Reliance Entertainment, Trilogic Digital Media Ltd. and Film Farmers Motion Picture Company are bringing to your nearby theatres Hawaizaada - an inspiring story of an Indian man who is believed to have flown an unmanned aircraft, eight years before the Wright Brothers. Set in the early 19th Century, this movie has Vibhu Puri making his debut as a director and the lead role of Shivkar Bapuji Talpade is portrayed by versatile actor, Ayushmann Khurrana. Supporting Khurrana in narrating this biopic is Pallavi Sharda as Sitara, the tamasha girl and Mithun Chakraborthy as Pandit Subbaraya Shastry who plays Talpade's mentor. 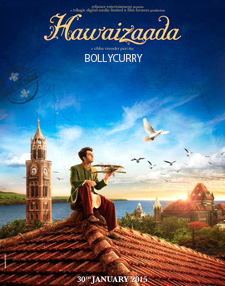 The album boasts of 10 songs, each unique in their own way and composed by 4 different music composers with Vishal Bhardwaj being one of them. Another composer of this album is Ayushmann Khurrana, who after singing and acting is trying his hand in composing for the first time with the number "Dil-E-Nadaan", a popular ghazal of famous Urdu and Persian poet Mirza Ghalib. Except for "Dil-E-Nadaan" and its reprise version, all the songs are penned by the director Vibhu Puri himself. This has got us, the BollyCurry Team, very curious about the Hawaizaada album and hence we are reviewing it to give you a glimpse on what to expect from it.
The opening track of this album is "Hawaizaada Dil", a foot-tapping breezy number sung and composed by Rochak Kohli. The lyrics by Puri are quite quirky and entertaining and if you are feeling upset, this one will put you in a cheerful mood right away. A song that will grow on you, keep it in your playlist for times when you need a pick-me-up!
The second track in this album is "Daak Ticket". Another composition by Rochak Kohli, this is sung by Javed Bashir and Mohit Chauhan. Puri brings another set of cheerful and quirky lyrics making you laugh at times, and that makes this song really worth listening to. A sweet and inspiring number; listen to it and smile away!
Next in line is a romantic song, "Mazaa My Lord", sung by Neeti Mohan and Mohit Chauhan and composed by Mangesh Dhadke. This song brings the flavor of Goan music to the table and has a very catchy tune. Chauhan and Mohan have sung the song in a casual manner unlike most of the romantic songs which are sung quite seriously, making it very different from the usual love ballads. Listen to it once, and you won't be able to get it out of your mind easily! We, at BollyCurry, are still trying!
Next is "Dil-E-Nadaan", a famous ghazal by Mirza Ghalib from the Mughal Era. Ayushmann Khurrana takes this ghazal to a whole new level with his velvety voice and diligent singing. Adding to the beauty of this number is Khurrana's composition which is melodious and calming due to the usage of Indian instruments like tabla and veena in it. Khurrana had composed this melody overnight which makes his music even more commendable. This song is definitely for the playlists!
Coming up next is "Udd Jayega", another composition by Mangesh Dhadke. Sung by Sukhwinder Singh and Ranadeep Bhaskar, this is clearly a song to take the movie forward and hence, out of context you won't enjoy this song much. Add this to your playlist only if you are a Singh fan because this song highlights his soulful vocals!
Bringing the count to six is  "Dil Todne Ki Masheen", the only track in this album composed by Vishal Bhardwaj who has mixed lavani style music with western instruments. Rekha Bhardwaj croons it in her usual style which like always wins our heart. This song brings lavani, a folk music belonging to Maharashtra, into the limelight.
Next in line is the the short, sad song "Yaadein Gatthri Mein",  by Harshdeep Kaur. It is composed by Mangesh Dhadke and has very soft and slow music. It is a piece of "Teri Dua", the last track of the album. It is definitely not something we would recommend you to listen as there is not much to it!
Third from the last is "Turram Khan" sung by Papon, Ayushmann Khurrana and Monali Thakur. Another breezy and foot tapping number, it is as entertaining as "Hawaizaada Dil" and "Daak Ticket". It is composed by Rochak Kohli and worth listening to at least once!
Second to last song on this album is "Dil-E-Nadaan (Reprise)", a modern version of "Dil-E-Nadaan" mentioned above, sung by Shweta Subram and Ayushmann Khurrana. The difference between the first version and the reprise is that the first song has classical instruments as base making the song sound semi-classical while this version is composed in modern style using western instruments like electric guitar as base. Khurrana also has sung it differently to suit the contemporary style, making both versions enjoyable and unique. Another song goes to playlists and seems determined to stay there for a while at least!
Finally winding up this melodious album is "Teri Dua". Composed by Mangesh Dhadke, this one has Sufi singers Wadali Brothers singing along with Lakhwinder Wadali, Harshdeep Kaur, Ravindra Sathe, Ranadeep Bhasker and Sukhwinder Singh. A devotional song to the core, this is the weakest of the lot commercially and might not endear much to the masses. This definitely won't be in the playlists unless the playlist is of Bollywood Devotional songs.
After listening to all the songs, one thing is for sure; the makers knew what they were doing when they created this album. Casual, breezy songs with catchy tunes make this album a really good collection but only one or two tracks stand out as unique while a couple of them are below average. Hence, we give this album 3 out of 5 stars and hope to hear more from budding music composer Ayushmann Khurrana!
Hawaizaada is releasing on 30th January this year. Check it out if you are a fan of Ayushmann Khurrana or a fan of period movies or someone simply looking for entertainment! Till then, give this album a try and tell us what you think of its songs!
Writer: Kalpana K.C.
Editors: Aishwarya S. & Hershi J.
Graphics: Shikha A.
Have a suggestion or comment for BollyCurry? Drop us a PM at BC_Dropbox today!