After the success of Phata Poster Nikla Hero and R... Rajkumar, Shahid Kapoor is back to prove himself yet again with his upcoming flick Haider, alongside the Ek Villain actress, Shraddha Kapoor. Directed by Vishal Bhardwaj, Haider is speculated to be the Bollywood version of William Shakespeare's classical novel, Hamlet. Having Gulzar pen down the lyrics for this flick, the audience is rest assured that its music album will give everything above the mediocre standard. Before the movie hits the silver screens on 2nd October 2014, BollyCurry exclusively brings to you Haider's music review. 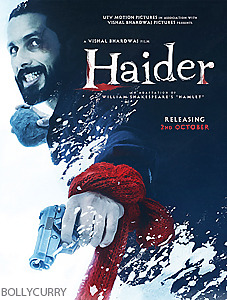 The album opens up with "Bismil Bismil" in the voice of Sufi master, Sukhwinder Singh. The song is shot at the Sun Temple during a time when it is entirely covered in snow and to add a cherry on top, the audience gets to witness Shahid Kapoor showing off his dance skills amidst the snow. The word 'Bismil' is associated with traditional Kashmiri folk dance and being shot in the heart of Kashmir, this song serves to provide the tanpura feel together with the rubab being played in the background. With Kapoor dancing to its tunes, this number is surely enchanting.
Bhardawaj satisfies all his listeners as he adds a peppy reprise version to the original "Bismil Bismil" track. Keeping the theme of Kashimiri as the original track, he only works to add a slight Arabian classical flavour to it so that it is enjoyed thoroughly.
"Aao Na" by the music rockstar, Vishal Dadlani, follows the queue next. It depicts Kapoor's rushed and hushed return to Kashmir after finding out that his father has gone missing. The entire sequence shows a tensed Kapoor deep in thoughts, while Dadlani takes a back seat as this upbeat and fast paced number is done to the highest of notches. It's a win - win situation for Dadlani since the avatar of a rockstar suits his voice well and hence, when he does it, he does it good.
From folk and rock, the music now moves a step further, right into jazz. Mastermind Arijit Singh lends his vocals for "Khul Kabhi Toh", an entirely romantic number. Throughout the showdown some beautiful love scenes are shot to showcase the intense love and chemistry between the two Kapoors. The slow and soothing melody catches the attention of its audience within seconds of listening and it leaves a lasting impression.
"Gulon Mein Rang Bhare" gives a swift end to the album. Once again committed with the voice of Arijit Singh, this track gives a fresh feel to the older version of Faiz Ahmed Faiz's song with the same name. Singh goes a notch higher to satisfy his listeners and you are sure to enjoy this one, but only if you have not listened to the original classic version.
Though a rather short one, Haider's album gives a soothing feel. They say music always plays a vital role in the success of a movie, and Vishal Bhardawaj has definitely hit the right spot as we can witness his soundtrack climb up the music charts like rapid fire. BollyCurry wishes Shahid Kapoor, Shraddha Kapoor and the entire cast and crew of Haider best of luck for its upcoming release. Don't forget to give a listen to the album and give us a briefing on your take!

Do you have a suggestion or comment for BollyCurry? Drop us a PM at BC_Dropbox today!
9 Likes