The upcoming flick Entertainment marks the return of Akshay Kumar, for the second and last time this year. The movie is a Bollywood comedy which witnesses the directorial debut of one of the most brilliant writer duo Sajid-Farhad. The movie stars Bollywood's Khiladi Akshay Kumar along with the Southern beauty Tammanah Bhatia, whilst the film is produced under the Tips Ltd. banner. The movie is all set to release on 8th August, but while you await that day, BollyCurry brings to you the Music Review of the movie. So lean back and enjoy as we journey along this album. 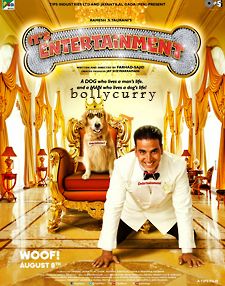 The album opens with "Veerey Di Wedding", which is a typical Indian wedding bhangra song. What makes it extraordinary is the foot tapping lyrics by Mayur Puri, that make you want to get up and shake a leg. The vocals of Mika Singh take the whole song a notch higher, whilst the music is composed by the music legends Sachin-Jigar and is picturized on the wedding of one of the main protagonists, the dog. One thing we can promise you is that it will keep you entertained.
"Veerey Di Wedding" also has a remixed version and it offers a higher tempo with its fair share of instrumentals and energetic beats. Dafliwaley did a good job at the remix, but the original version is preferred.
In the following song, love is in the air as "Tera Naam Doon" is a true romantic number. The soft tunes and sweet lyrics enhance the already romantic couple. Atif Aslam lends his vocals to this beautiful number and does absolute justice to the heart touching lyrics penned down by Priya Panchal. Shalmali Kholgade completes the song in every way, joining Aslam.
The next song up is a rendition of a very famous nursery rhyme. Everyone has probably heard "Johnny Johnny", the nursery rhyme, during their childhood; however Entertainment brings to you the adult version. The whole song is one big party with voices like Jigar, Priya Panchal and Madhav Krishna breaking free with this party number. But more than the vocalists, it's the lyrics that grab attention as they are hilarious yet head bobbing. Mayur Puri definitely did wonders when he penned this track as his words are the centre of attention.
"Teri Mahima Aprampaar" brings veteran singer Udit Narayan in the limelight as he enthralls everyone with his magical voice and alongside him is Anuskha Manchanda, who matches his each tune. The upbeat song is composed by Sachin-Jigar and it's easily another highlight of the film. All in all, the hip shaking song is fun and definitely perfect for the dance floor.
The list concludes with "Nahi Woh Saamne", the only slow song of the entire album. It has a sad background score and is bound to have you swaying with that loved one despite being brief. However, the best part about the song is Atif Aslam's almost unplugged rendition - his soulful voice is enchanting, as is the music by Sachin-Jigar. The song is perhaps, the perfect ending to the very happening album.
Overall, the well rounded album seems very promising as it ranges from heavy party numbers to slow, enchanting songs. BollyCurry awaits your reviews on the album and be sure to let us know your favorite song! Until then, we wish the entire team of Entertainment the best of luck on the movie and hope the movie is as successful as the songs.  Moreover, don't forget to catch the movie on 8th August, 2014.
Author: Fatima W.
Editor(s): Mohini N. and Gunia K.
Graphics: Shikha A.
Do you have a suggestion or comment for BollyCurry? Drop us a PM at BC_Dropbox today.