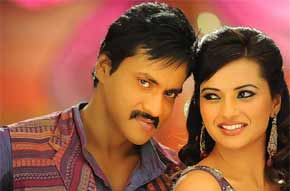 Telugu actor Sunil-starrer "Mr. Pellikoduku", a remake of Hindi blockbuster "Tanu weds Manu", is nearing completion and N.V. Prasad, one of the film's co-producers, guarantees the movie will be as entertaining as the original.

"We have ensured that the entertaining part of the original is not lost in our film. Even though we have made the film keeping in mind the image of our hero Sunil, we have all elements to impress the multiplex crowd as well," Prasad told IANS.

"The comedy from the original has been tweaked in such a way to impress all sections of the audience. It is a wholesome family entertainer and, therefore, we don't want to compromise on the output," he added.

The film, which is currently in the post-production phase, stars Sunil and Isha Chawla in the roles of R. Madhavan and Kangna Ranaut.

Devi Prasad has directed the film, which has cinematography by Sameer Reddy and art by M.S. Ravi Kumar. Paras Jain has co-produced the project.

"I will get my Head Chopped but won't bend down": Kangana Lashes Out; ...