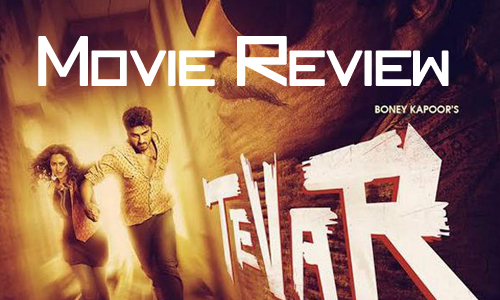 First film of the year and nothing new to offer. One could say Sanjay Kapoor wanted to play safe with his debut into production, but the audience has already seen a goon in love with a girl, boy unknowingly saves the girl eventually they fall in love, some dishum dishum, picture khattam. Sadly Amit Sharma's Tevar too is nothing different.
Arjun Kapoor plays the role of Pintu Shukla who is just another guy in Agra. Arjun plays a role that is a mixture of his roles in Ishqzaade and Gunday. He looks kind of bulky in the film and has a general performance,  nothing to mention at all. But he can surely carry a mass entertainer on his shoulders. The fight sequences in the film are average but believable, thanks to Arjun's bulk.
Sonakshi Sinha plays the role of Radhika who is Gajender Singh's obsession, but eventually falls in love with Pintu. If I'm not wrong she dances twice, cries thrice and runs innumerable number of times, yes that's pretty much what she is doing in the film.
Last but not the least, Gajender Singh. Played by Manoj Bajpayee, is the best and most entertaining part in the entire film. Dailouge delivery is just awesome and when he is frame you won't look at anyone else for sure. Even though he has played the political goon before, his performance in Tevar still looks fresh.
Editing is done in a haphazard manner. So much importance has been given to the action that the romance they develop looks hurried. Arjun Kapoor seems to fall in love with Sonakshi Sinha because he wants the movie to finish (pun intended). All in all the movie has nothing new to offer but can be an option for you to pass your time this weekend.