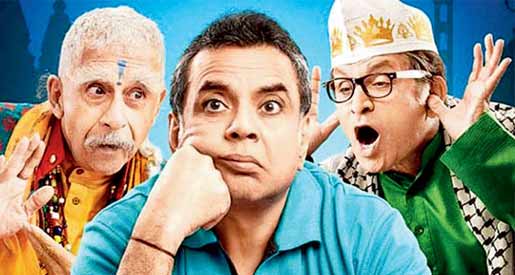 Making a film mocking the sacred cows isn't easy in this country where every artiste stumbles on a sensitive organisation, green saffron or yellow, every step along his way.

The makers of "Dharam Sankat Mein"(DSM) must be applauded for going where angels and agnostics fear to tread.

Of course, Raj Kumar Hirani's "PK" did it recently, how can we forget? And before that Umesh Shukla's "OMG! Oh My God". Much of Rawal's performance in his new religious satire is a repeat of what he has already done in OMG.

Now there is the added responsibility and burden of representing the BJP. Rawal takes on the tricky task of being both non-religious and finally hugely respectful towards all religions.

To make his pro-government stand even more cogent, the film is shot in and around Ahmedabad in the lives and colonies of Gujarati families. This gives the narrative a quaint and comfortable lived-in structure even when the dialogues raise thorny issues on the Great Religious Divide.

The film outwardly seems to scoff at ritualistic religion. The script, derived from Josh Apignanesi's "The Infidel" turns the satire on anti-Semitism to a pro-Islamic statement. The very idea of talking religion so openly on screen seems audacious enough. 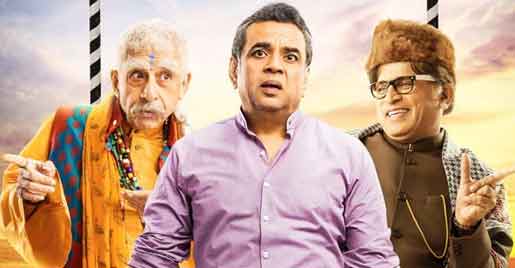 There are scenes in the early part of the film where Rawal's Gujarati Hindu character scuffles verbally with his Muslim neighbour, played with emphatic elan by Annu Kapoor. These scenes are the backbone of the film. The dialogues penetrate sacrosanct spaces occupied by both the religious orders, offending both and thereby hurting none, so to speak.

Hats off the Rawal and Kapoor and the dialogue writers (Alpesh Dixit, Sanjay Sharma, Vijay Desai) for the absorbing lines shared by the two characters.

Pithy' the words are lost in contrived translation. In trying to be faithful to the original material, "Dharam Sanket Mein" ends up being a bit of a botch and a whole lot of hash. The twist when Rawal's wife suspects him of having a homosexual affair with his neighbour fitted in well into the original. Here it looks forced and embarrassing.

Adding to the identity crisis are the songs. Punjabi star Gippy Singh shows up dancing to Bhangra beat whose significance is as hard to decode as the reason why Naseer would take up a role so ridiculously over-blown.

Naseeruddin Shah as the Hindu godman Neel Anand Baba is quite evidently modeled on a certain self-styled rock-star guru. Naseer seems to have a lot of fun chanting the cheesy lines and being extra-friendly with female devotees. The fun, alas, never filters down to the audience.

There is an inherent dryness to the drama that is hard to ignore. And even harder to digest. As the screenplay serenades a stupendous surfeit of absurdities, you are left counting the blessings inherent in the theme of infidelity.

It gives filmmakers the freedom to think out of the box. Though how far that freedom is taken is entirely a matter of individual vision.

"Dharam Sankat Mein" has some lucid moments of self-questioning where the religious divide is pungently scrutinized and satirized. Hilarity at the cost of organised religion is not an easy target to achieve for any filmmaker.

This films achieves a remarkable threshold of thoughtful humour. Though a lot of it is gradually eroded by over-punctuated satire, this is that rare film which takes potshots at the religious divide without offending anyone.