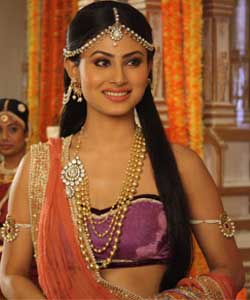 Actresses and their tantrums are no big news in the world of entertainment.

The latest to add on to the list is the new Sati of television, Mouni Roy. We hear that the actress who is presently doing Nikhil Sinha's Devon Ke Dev. Mahadev on Life OK is apparently tough to handle on the sets.

According to our source, "She never reaches on time for the shoot which delays the shoot. She also creates issues regarding her costumes."

Mouni has always been in news in the past for the air that she has and we hear the same from the sets of Mahadev.

We also hope that it's just a rumour.

sunilraj 8 years ago mouni is one of d bst actress nd a superb dancer v hv&#65279; in d tv industry

sunilraj 8 years ago Good episodr, but still, they need Mouni&#65279; back as Parvati

_KAYNAAT_ 8 years ago all i can say i 've never been a fan of a ny mythological show bt mahadev is simply amazing and so is mouni...

rani-lucki 8 years ago i hav seen her in pati patni aur woh, i don't think mouni would do such a thing :-)
she is quite a sweet person

AnjanaYYZ 8 years ago 13 hours a month... and u r allowed to show up late? Where do we sign up?

Sanyomg 8 years ago Some ppl are also botherd about her acting skills bt I dont think any tv actres suits sati as much as much as mouni does N IN MY OPINION SHE DOES 98% JUSTICE TO D ROLE OR AT TIMES EVEN 100...

moon.beam 8 years ago Her acting is also not very good in the show...

Kangana Shares Video of Anurag Confessing To Have 'Abused a ...
58 minutes ago