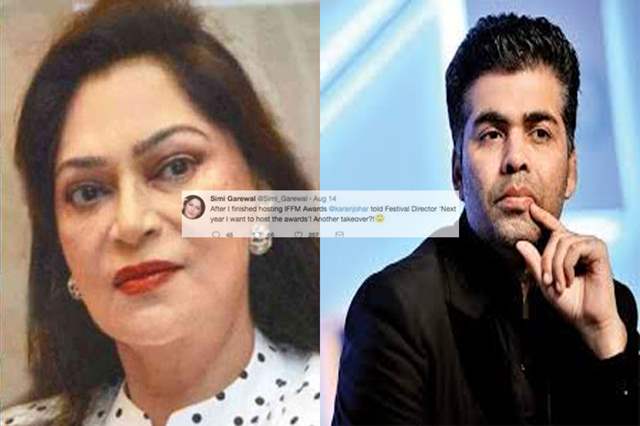 It certainly seems that the can of worms that has seemingly opened right now owing to the passing away of Sushant Singh Rajput against some of the biggest names in the industry seems to be only getting murkier with every passing day. After several celebrities and the public, in general, have called out the likes of Karan Johar and Salman Khan among others for increased nepotism, another one has joined the list, however from an earlier post.

While actor Kangana Ranaut has been rather upfront and has been slamming Johar for his actions, many others have directly and indirectly hinted at the same.

Before Koffee With Karan, if there was one chat show that was not just popular but loved too then that was Rendezvous with Simi Garewal. The veteran actor hosted five successful seasons in the early 2000s before even Koffee With Karan arrived. Now, an old post of Garewal has been dug up which connects to Garewal and Johar both being present at the Indian Film Festival for Melbourne in Australia, but in different capacities. While Johar was present to host a masterclass on 'How to direct a big Bollywood dream,' the veteran actress was invited to host the awards ceremony that took place towards the end.

Seemingly, after the festival was over, Garewal heard that Johar had spoken to IFFM's festival director about wanting to host the awards in 2018. And needless to say, the actor was really pissed.

She tweeted about the same where she said, "After I finished hosting IFFM Awards, @karanjohar told Festival Director 'Next year I want to host the awards'! Another takeover?

Back when the post was out, it was taken the context of it being a friendly jibe but now, it is being read into.