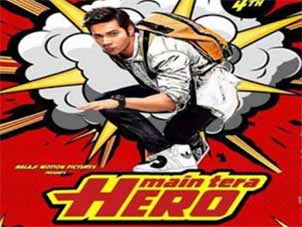 The entertainer has collected a whopping net amount of Rs.22.73 crore in its opening weekend, said a statement.

Directed by David Dhawan and produced by Balaji Motion Pictures, actor Tusshar Kapoor is happy with the figures as the movie performed well despite the World Twenty20 final between India and Sri Lanka in Bangladesh April 6.

It is a mix of the commercial content, Varun's screen presence and the movie's promotions that have worked in favour of the entertainer, says an expert.

Released in approximately 2,500 screens, the movie was made under a budget of around Rs.50 crore.

"'Main Tera Hero' is more commercial than 'Jal', which also released on April 4. It's got the combination of Varun and David and since it is produced by Balaji Motion Pictures, it is well promoted," Rajesh Thadani of Multimedia Combines told IANS.

"Jal" on the other hand, is directed by first-timer Girish Malik and stars Purab Kohli as the lead actor.

"It is for a select audience, so it earned less than Rs.50 lakh in three days," said Thadani.