Zee's Maa, produced by Shakuntalam Telefilms will be seeing its untimely end, courtesy its low TRP's. 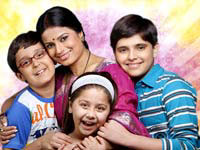 Featured Video
An actor on terms of anonymity confirmed that, "Yes, it is true that Maa is drawing to a close.The show never got the numbers it promised, and one of the reasons being that the channel had planned the launch of Maa initially in a prime time slot. A slot as early as 7 PM did not fit into the bill as far as the concept was concerned".

Now Maa will be winding up on April 17th, and a unique game show Ghar Ghar Mein will be replacing it.

According to our source, "Ghar Ghar Mein will launch on 20th April at the 7 PM slot. It will be a game show hosted by Vipul Roy and Manish Paul, where they will be going from house to house and will put the family members, basically housewives on the hot seat with their impromptu questions on various aspects. They will give away prizes too, to the most deserving family member".

We messaged Producer Shyamashis Bhattacharya to confirm the news of Maa, but he remained unavailable for comments.

Even Ajay Bhalwankar, Programming Head, Zee was also not available to comment.

baby987 13 years ago zee hardly gav maa a chance to parform... its zee''s downfall.. in their desperation to restore d trps they are screwin their own future, none of the serials on zee are worth watchin.. wake up zee programming heads... endin maa on 7.30 slot wont help.. wat bout sp, gklb, bmtd n maayka?? they r on a more imp slot.. do somethin bout them first...

13 years ago ugh!!!!!!!!!!!!!!!! another ignorant wrong decision by zeetv. now this is why I will only watch star and the other channels versus zee now

13 years ago Didn''t give it a chance at all. This show is the best I''ve seen in a long time. All it should of received was a chance to make it with a GREAT TIME SLOT. SO VERY MAD AT ZEE

13 years ago why are zee ending so many show i like this show they should give it a chance is still new......... very bad idea

13 years ago I don''t watch Maa, but THERE IS SOMETHING WRONG WITH ZEE!!! it''s ending alll good shows and bringing in all these new good shows........ughhhh

+ 3
13 years ago but .. what about the leap they said they show will have aleap of 20 years where theyw ill show the kids grown up