View Profile
Hey guys... though there is very less possibility of having sequels for our favourite movies from the year 2008 one thing is sure that the secret formulas of hit movies will be definitely used by the directors. 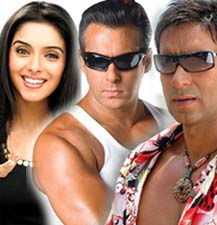 Featured Video
"Rock On" was the one of the hit movies in the year 2008. The movie was based on new genre "rock music", something that has not yet been explored in Indian film industry. Till now it was thought that India has no target segment for "rock band" but the success of the movie proved it all wrong. Not only was the story of band but also the kind of songs that were incorporated in the film liked by the audiences.


It seems that director Vipul Shah got inspired looking at the audiences response for the movie and this may be the reason that his next "London Dreams" is based on "rock band".


The movie is a story of a rock band from England and is a story of two childhood friends played by Ajay Devgan and Salman Khan, who are rock musicians. The female lead is played by Ghajini beauty "Asin" who will be seen playing a "guitar" in the movie. Recently, we saw actress Katrina Kaif playing a "cello" in Yuvvraaj.


Director Vipul Shah is known for his movies like "Aankhen", "Waqt- the race against time", "Namastey London". With such a bunch of hits a lot is expected from this acclaimed director. So, once again are you all set to rock?