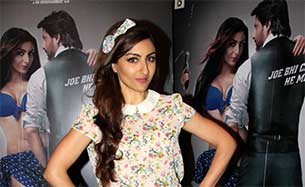 Following the release of her Bollywood film "Mr. Joe B. Carvalho", actress Soha Ali Khan has her eyes set on collecting less books and reading more of them.

The actress' elder brother, Saif Ali Khan too is a voracious reader.

Breaking
Breaking Erica Fernandes confirms shooting for a music video with ...
42 minutes ago