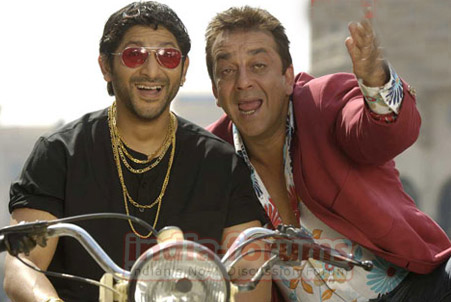 'It was a great honour for me to enact the role of Munnabhai in 'Lage Raho Munna Bhai'. Doing the film was a learning experience for me,' the actor maintained.

He was speaking after being honoured with the India Splendour award for his characterisation of Munnabhai in the popular hit of 2006.

The award was conferred upon him at a function organised by Mglobal Trust, a corporate social responsibility (CSR) initiative of telecom major Spice group.

'Gandhism is relevant today and will always remain relevant. I believe in non-violence, peace and let people live. Both my mother and father were Gandhians,' the actor said, referring to Nargis and Sunil Dutt.

'I must say 'maaza aa gaya, mamu',' he beamed with the Munnabhai lingo.

Dutt has been sentenced to six years in jail in the 1993 Mumbai serial blasts case and is currently out on bail.

The chief guest at the event, Jagadguru Shankaracharya Swami Divyanand Tirthji Maharaj, was also honoured with the India Splendour award for his contribution to spirituality and humanity.

'Mahatma Gandhi was not only a leader he was also a global visionary. Today's event is a celebration of our history, values and remembering a great soul known to the world across as the Mahatma,' said Spice group chairman Bhupendra Kumar Modi.

'This celebration is all about commemorating the Gandhian philosophy and its significance in today's world. These awards are meant to celebrate and felicitate Indians, who epitomise the three facets that make India splendorous -- heritage, holistic and hi-tech,' Modi explained.