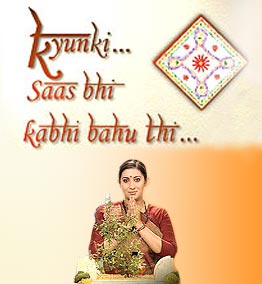 Launched on 3rd July 2000, the flagship serial of Ekta has overcome many a barriers, competition and remains the top-rated show on television even today. The story which revolves around the pivotal character of Tulsi fighting against all odds to keep her family united, has managed to keep the audience glued to the television sets over the years with its gripping story line and great casting.

When asked about this accomplishment, a very thrilled Nivedita Basu, Creative Head, Balaji Telefilms says, “I am so happy that Kyunki Saas… has completed eight successful years today. We are hoping that it will rule television for another ten long years”. The serial has seen leaps happening in plenty, and has also witnessed the exit and re-entry of the Iconic Bahu of Television, Smriti Irani aka Tulsi recently. So what is it that has kept the popularity of the serial on a high even after 8 long years? “It is the presentation of various characters that has kept the audience glued to the story track. This explains its popularity to a great extent”, quips Nivedita. So what lies ahead in the story that will help rise the TRPs? “TRP has been high for Kyunki ever since its inception and it will always be at the top”, comes the immediate reply from the Creative Head..

The abode ‘Shantiniketan’ which houses the five generations of the Virani parivaar certainly has much more in store for the audience!

well....congo to the kyunki team

+ 3
14 years ago Ekta will continue this Saas Bahu saga into 3008. Whether people like it or not, she doesn't KARE! Dear Ekta, cockroaches have been around for a long time but....... get that?

+ 3
14 years ago Wow years fly by so fast...congrats to Balaji Production & to Kyunki Team for all this years of saas-bahu, eye drenching serial...

14 years ago now this serials is left for records only, any way cograts

14 years ago Serioulsly there is nothing really left in this show!!!!
WHY DON'T THE PRODUCERS JUST COME TO TERMS WITH THIS????
It was become repetative to the COREEE!

It should be finished gracefully, not when people are sick and tired of it and boycott it totally!!!!

Why doesn't ektA everr got that???

Look at FRIENDS.... it ws perhaps the most watched show in the world!!!
Yet it was gracfully cancelled, even though it was damn popular and the countless fans would have watched it forever!!!