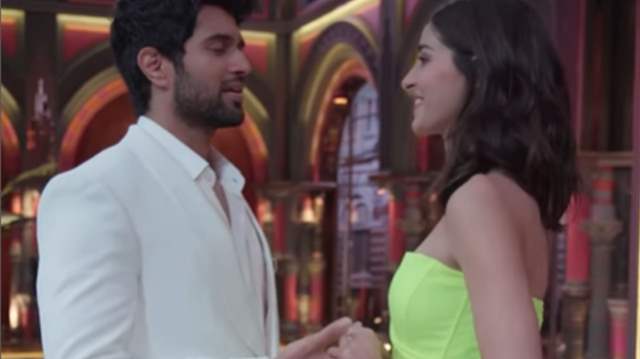 Karan Johar is once again making it to the headlines with his show's season 7. The show has already aired three episodes and a lot has brewed since then. Yesterday, Karan took to his social media handle and revealed that his next episode will be the graced by the Liger stars, Ananya Panday and Vijay Deverakonda.

Now amping the excitement for the episode, Karan Johar took to his social media handle and shared an exciting BTS video from the episode.

In the clip we can see Vijay telling something to Ananya in Telugu. Listening to him Panday replies, 'That's so sexy! say it again'. By then Karan barges in and says, 'he just said, you are cute but stop hitting on him'. Hearing to this Ananya makes a sad face and Karan starts giggling. Sharing this video Johar wrote, "‘tis the season of cheese😅 @thedeverakonda @ananyapanday Catch the #Liger duo on an all new episode of #HotstarSpecials #KoffeeWithKaran S7 tomorrow only on @disneyplushotstar."

For the unversed, Vijay Deverakonda had become the topic of discussion in the 2nd episode of Koffee With Karan which was graced by Sara Ali Khan and Janhvi Kapoor.  Sara revealed about wanting to go on a date with the south actor. The BFF's denoted Vijay as 'Cheese' and were seen constantly making references to it during the rapid fire round.

To be noted, Ananya and Vijay's film Liger which is co-produced by Karan Johar and helmed by Puri Jagganadh will hit the theatres on 25th August. The trailer of the film was recently launched and fans are quite excited to witness this actioner on the silver screens.