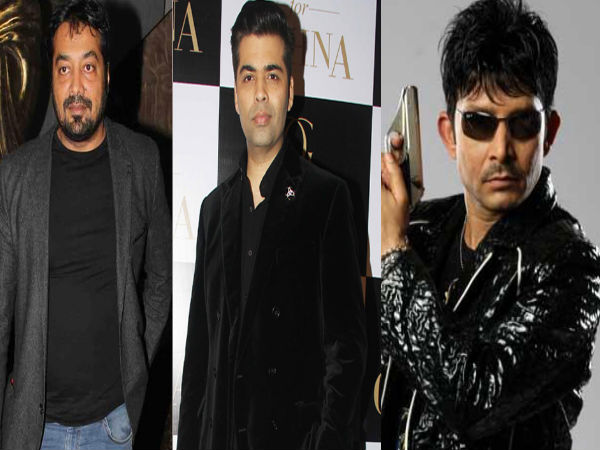 If there are roses then thorns are sure to accompany. Bombay Velvet is all praises from friends and fans but there is someone who is putting up all his energy in bashing Anurag Kashyap's dear project. That someone is none other than controversy king Kamal R Khan a.k.a KRK.

KRK has the habit of putting his head into everything. His quirky comments surely take him nowhere still he is very dedicated to continue his insane work. The recent bizarre that this moot man has created is over the highly appraised movie Bombay Velvet.

It all started after the announcement of the second trailer launch of Bombay Velvet, following which KRK tweeted: @kamaalrkhan: Sir pls leave it Naa. Why to torture public sir? @karanjohar: #BombayVelvetNewTrailer coming up in less than an hour...watch this space..

After the trailer was unveiled KRK again had issues and he tweeted: "After watching 2nd trailer of #BombayVelvet I can say with guarantee tat it's been done by Karan Johar not Kashyap. Chalo best of luck 2him."

None the less his insanity surely can be proved by this gibberish comment: Sir @anuragkashyap72 I accept ur challenge if #BombayVelvet will be a hit I will cut my hathiyar but if not then you will cut your hathiyar.

To add to his claptrap he posted another pathetic statement: Sir @anuragkashyap72 I acepted ur challenge so now confirm tat ur will cut ur hathiyar if #BV is flop n u will cut Hathiyar + B***s if washout"

There is no end to some balderdash things and it includes KRK. No wonder some people can get down to such shoddy behavior just to stay in the limelight and it doesnt bother to then whether its a good or a bad publicity.

hollybollytolly 5 years ago I think if nobody pays him attention he will stop this things.He is only doing this things to get attention

5 years ago I guess everyone has a right to an opinion. What is one man's meat is another man's poison.